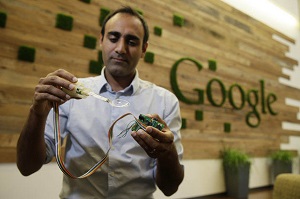 Where would we be without technology? Innovative inventions have helped us to cook, wash our clothes, surf the net, get from A to B without breaking a sweat and other tasks that would have been difficult (if not possible) just a few years ago. And what’s more, exciting ideas just keep on coming, so let’s take a look at five health tech inventions that are sure to change lives in 2015.

1. Exciting Hearing Aid Technology
With state-of-the-art hearing aid devices available from the likes of Hidden Hearing, those suffering from hearing loss now have access to a wide range of discreet auditory aids. Technology continues to improve in this area too with many devices now delivering twice the processing power with a 30 per cent reduction in battery drain. AutoSense features also help users to adjust to different environments seamlessly without having to change settings and smart hearing aids have recently been introduced which allow people to connect wirelessly to their iPad, iPhone or iPod without an intermediary device.

2. Liftware Utensils
Simple tasks like eating can be extremely difficult for people suffering from Parkinson’s Disease and other ailments which cause hand tremors. That’s why, Lift Lab (a company recently acquired by Google) has developed the Liftware utensil which is designed to reduce shaking by up to 70 per cent. While accelerometer sensors in its detachable handle detect the force and direction of hand tremors, actuators move the utensil in the opposite direction to compensate – now that’s an invention! The device even comes with multiple attachments including an everyday spoon, a soup spoon and a fork.

3. Smart Glasses
Imagine what it would be like to see clearly for the very first time? Well, this is becoming a reality for many visually impaired people thanks to the development of Smart Glasses. According to research, 90 per cent of those registered blind still have some existing light perception and so the glasses use 3D cameras to enhance what little they can see through a computer and this is projected onto a lens. While the glasses came into existence two years ago, they’ve been greatly slimmed down and thanks to funding from the Google Impact Challenge are now set to be trialled by 1,000 people throughout 2015. If all goes to plan, they could be on sale to the general public next year for around £500-£600 – watch this space.

4. Jerry The Bear
It’s not easy for little ones to cope with a type 1 diabetes diagnosis, but a new company called Sproutel are doing all they can to make things easier by introducing Jerry The Bear – a fluffy teddy who also has diabetes. This wonderfully interactive toy helps kids get to grips with the self-monitoring they must do every single day, encouraging them to check Jerry’s blood sugar levels with a simple squeeze of his finger. If the levels are too high, a toy insulin pen as well as a touchscreen on Jerry’s chest can be used to correct it and kids can even swipe various foods over Jerry’s mouth (which come in the form of cards) to see how each one effects his glucose levels.

5. Ostomi-i-Alert
Coping with ostomy bags – a medical necessity for people with a stoma, which collects waste from the colon or bladder – is not an easy task as Michael Seres discovered after he experienced the indignities of life following a pioneering bowel transplant for Crohn’s disease. While recovering from his operation, Seres invented a Bluetooth device, which monitors all kinds of prosthetic pouches to avoid leakages and measure outputs.
It accurately measures the pouch’s fullness by sensing the arc bag’s external curvature and alerts patients via their smartphone when their bags need changing. Not only that but it also sends measurements to clinicians saving them a whole lot of manual work.

While Seres invention is already available, his aim for 2015 is to make it available on prescription by proving that it’s cost saving to the NHS.

Technology has come on leaps and bounds over the years and the medical industry is benefitting from new inventions all the time.

Jaston
Very good info here. MCS sounds like something that would be very hard to pin down. It can be frus...
Multiple Chemical Sensitivity (MCS) - What Is...
about 5 months ago

Stone
I believe that divorce rate increases have also been caused by simplification of divorce filing proc...
The Mental Health Effects For Children Of Div...
about 5 months ago

Guest - Nicci Skincare
Thank you so much for these insights, you're gonna change so many lives!
5 Ways to Help Treat the Most Common Addictio...
about 5 months ago

Guest - James
This was a really great article on hazardous waste management. It was very informative and gave grea...
Hazardous Waste Management
about 6 months ago

Guest - OM
IS CFIDS RELATED TO AIDS?
America's Biggest Cover-Up: 50 More Things Everyone Should Know About ...
Chronic Fatigue Syndrome and Non-HIV AIDS
about 6 months ago