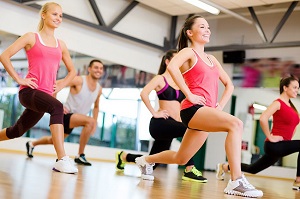 College students today have a lot on their plates. With rising costs for tuition and housing, many students have a packed schedule and a part or full time job that they have to juggle with personal and family time. With many students now taking some or all of their classes online, they are also facing a less synchronized schedule and are not moving around as much. While it seems like the last thing on a college student’s mind to help cope with these issues would be exercise, scientific studies show that regular workouts actually provide measurable benefits to the cognitive abilities of even the most taxed of students, exercise on an exercise bike or other pieces of equipment, can leave you feeling better about yourself, more energized and less stressed. Read on to see five ways that exercising can help make it easier for college students to perform better in their classes.

There have been many studies done that show that people who exercise have increased volume in the parts of the brain that control thinking and memory such as the prefrontal cortex and medial temporal cortex (Godman 2014, pp5). In addition, the hippocampus, another section of the brain which directly controls the formation, retention, and recollection of memories, begins to shrink in adults as early as their 20s, becoming a common cause of memory loss over time. Regular exercise has shown to not only prevent this shrinkage in the hippocampus, but also promote growth (Reynolds 2012, pp6).

Studies like this have been done on lab animals as well as humans of all ages. There was even a test conducted on senior citizens where a control group did no exercise for a year while a second group stretched and walked for the same amount of time. The group that exercised showed brain growth while the other group showed shrinkage (AIU 2012, pp5). College students who exercise regularly will see these benefits for themselves.

The development of brain cells is extremely important to college students attempting to take in all kinds of knowledge to one day become experts in their respective fields. Researchers at the National Institute of Aging have found that exercising actually stimulates the growth of brain cells because of a specific protein called cathepsin B. This protein is secreted by the muscle tissue in excess while working out and is then carried to the brain where it immediately triggers neuron growth (Knapton 2016, pp2).  Tests have been done showing increased cognitive response as a result of this action.

There is a strong connection between exercising and improving one’s mood. This is because exercise releases endorphins, helping to create a subtle sense of euphoria. (WebMD 2017, pp4). Exercise helps to fight depression, makes people less edgy, and generally helps them to stay more positive. These benefits can be felt in as little as five minutes after beginning a workout (Weir 2011, pp7). This can help students combat feelings of being overwhelmed, uselessness, or other negative things that could impact their mood.

Stress is a major issue for college students and over time can lead to anxiety, stomach problems, and even heart attacks. Exercise is both a physical and mental outlet that has been proven to help ease anxiety. So, the next time you feel a little anxious, just hop on a treadmill and try going for jog. Exercise also improves sleep which can also combat stress (AIU 2012, pp9).

A study done on a group of children by the University of Illinois found that those who exercised for an hour per day had increased focus and mental capability that allowed them to score up to twice as high on tests as those who did not (Donnelly 2014, pp3). Exercise has been shown to also increase participation and curb inappropriate behavior. These benefits could be especially important for online students as they have to make their own schedule and stay self motivated.

The moral of the story is that regardless of how busy the life of a college student might be, there should always be time made for exercise. Whether this might be working out in a gym, walking, hiking, or a sport, it should be an integral part of day to day activities. The benefits will be clear when grades come in.


About the Author
This article is written by Jennifer. You can find more information about her on http://www.treadmilltalk.com/