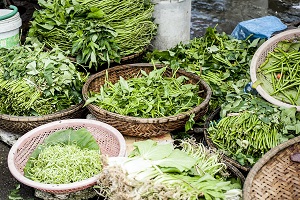 As well as making an interesting hobby, growing herbs in your garden is a brilliant way to support your kitchen and household. Fresh basil for your pasta dishes, rosemary for your roast chicken, all within reach and fresher than anything you’ll find at the shops. Herbs are certainly useful to cultivate today, but in ages gone by, they had an even stronger note of importance among people.
From medicine to cooking, cleaning to providing alibis, herbs were hugely important in medieval times. If you’d like to bring a little history to your herb garden, read on for all the weird and wonderful ways herbs were regarded by our ancestors.
Basil
To us, basil is pretty harmless. A wonderful accompaniment to tomato-based dishes, it’s a little strange to imagine that those large, flat leaves were regarded with fear! A fear of what, you ask?
Scorpions.
Yes, some medieval doctors advised against sniffing basil leaves, as the act would cause scorpions to grow inside your head and infest your brain. A very strange conclusion to come to, but if your doctor told you that, we reckon you’d be a bit hesitant to take a whiff of basil too.
The link wasn’t wholly without reason, (though there’s no reason to go burning your basil plants just yet, the ‘reason’ is far from an exact science). According to Our Herb Garden, the scorpion-scare comes from the observations of an English physician, who wrote how he once witnessed basil being put under a stone, and two days later, a scorpion appeared. The doctor clearly thought the most logical explanation was that the leaf caused the scorpion to manifest, rather than the scorpion happening to crawl under a rock. And, like misinformation and fake news today, the idea spread and suddenly everyone was terrified of the evil brain-scorpion plant.
If you’re willing to take the risk of spontaneous mind scorpions for a little medieval flare in your garden, perhaps you can introduce basil into your garden! Just don’t put the leaves under any rocks. Just in case…
Horehound
If you’re suffering from a cough, a medieval physician would recommend drinking a concoction made from horehound. A bitter herb that can be easily grown, it was also used to treat breathing problems too.
It was also apparently used to ward off witch’s spells. Whether this was because witches had a sweet tooth and recoiled at the bitterness of horehound, or they had notably bad coughs, we may never know for sure. Mind, farmers of the past noted that black horehound smelt so bad even their cows avoided it and wouldn’t eat it. Don’t let that basil-phobic English physician know about that, or he might conclude all cows are, in fact, witches…
Still, horehound remains a popular choice for sweets and throat lozenges. It may well find a place in your herb garden!
Watercress
It has been reported that watercress has more vitamins than many other leafy greens, with more calcium than milk and more iron than spinach. Medieval folks were onto something then, when they deemed the herb to be a healing one.
It’s quite possible they put a little too much faith in the little herb though. Archaeologists excavated a site in Scotland called Soutra, which was a huge medical complex in medieval times — it was essentially a hospital with a church on it. Coming across the horror-movie-sounding “blood pits”, (which were areas which the doctors would dump medical waste like blood and other wonderful things), we were given a unique insight into the medical practices of the time.
And how unique it was. They came across a lot of teeth and a pile of watercress, and some texts that suggested why the herb was found with the discarded teeth. Watercress had been used to prevent loose teeth falling out. The fact that the blood pit was filled with teeth-sans-owners and a load of watercress would suggest that this method didn’t really work. It wasn’t totally without grounding though; watercress was used successfully to treat scurvy, which often saw teeth vacating the poor sufferer’s mouth.
We’d recommend a dentist for loose teeth rather than a watercress-based flossing, but watercress is another good choice for your medieval herb garden selection. It’s a great superfood for salads and goes well in sandwiches too!
Rosemary
Rosemary is a very popular herb today, so you’re probably wondering what terrifying story of the past will jade your view of this herb. Fear not, because rosemary was also held in high regard by our medieval ancestors. In fact, it was used to cure basically everything.
The Medievalist produced a very long list of old-time wonders that rosemary was attributed to, including:
The wonder-herb was also frequently noted to cure all manner of illnesses. While we wouldn’t recommend trying to use rosemary every time you get ill, it’s definitely a medieval staple for your herb growing ventures. Your kitchen will certainly love it!
Angelica, aka, wild celery
Angelica was used as a healing plant too, like many on this list. But it was noted for being a means to ward off the plague, thanks to a dream a monk had about an angel that told him so. Sadly, the plague wasn’t as averse to vegetables as the heavens had told the monk, and it didn’t work.
Even more strange than that, the wild celery was observed to be loathed by witches. Therefore, witches wouldn’t grow any Angelica in their gardens, maybe because of their religious connotations. People would grow it, use it, or even wear necklaces made out of its leaves. If someone was accused of being a witch, whipping out your prized, home-grown wild celery would usually be enough of an alibi to end the accusation.
Get your gardening tools and multi-purpose compost ready, because there you have it! The key players in any medieval herb garden, yours to replicate with the knowledge of their weird and wonderful backstories.
Sources:
http://www.ourherbgarden.com/herb-history/basil.html
https://www.historyextra.com/period/medieval/9-weird-medieval-medicines/
https://www.oldtimecandy.com/blog/what-the-heck-is-horehound/
http://ruthjohnston.com/AllThingsMedieval/?p=1448
https://digventures.com/2015/06/medieval-medicines-dug-up-by-archaeologists/
http://www.medievalists.net/2016/01/23-medieval-uses-for-rosemary/
https://www.theguardian.com/science/2017/jul/25/catnip-and-dried-pig-testicles-study-reveals-medieval-infertility-advice
https://foodfacts.mercola.com/watercress.html
http://microfarmgardens.com/blog/2016/2/23/herbal-remedies-from-the-dark-ages.html
https://www.abdn.ac.uk/sll/disciplines/english/lion/medicine.shtml
https://www.cloverleaffarmherbs.com/angelica/

Maff
My wife and I separated when our daughter was 12-18 months. She is now 3 years old and the happiest ...
The Mental Health Effects For Children Of Div...
about 1 month ago

Gacess99
The child life is very simple and innocent and divorce is effect on child's life as emotion and ment...
The Mental Health Effects For Children Of Div...
about 1 month ago

Stone
I believe that divorce rate increases have also been caused by simplification of divorce filing proc...
The Mental Health Effects For Children Of Div...
about 7 months ago

Guest - Nicci Skincare
Thank you so much for these insights, you're gonna change so many lives!
5 Ways to Help Treat the Most Common Addictio...
about 7 months ago

Guest - James
This was a really great article on hazardous waste management. It was very informative and gave grea...
Hazardous Waste Management
about 7 months ago