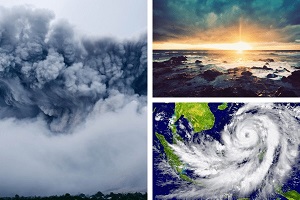 These Are The Best Movies About Natural Disasters

Nature can cause catastrophes of unsuspected levels, such as snow avalanches, earthquakes, tsunamis, erupting volcanoes… Anywhere there may be a potential natural disaster in sight.

Spanish film directed by Alejandro Amenábar that tells the story of a family that survives in a tsunami that leaves thousands of dead. A heartbreaking story that was awarded worldwide.

The film is based on the true story of the Álvarez Belón family, who experienced the tsunami disaster that devastated Thailand in 2004 in first person. 27 million liters of water were used to record the tsunami scene, making the Extraordinary technical section helps us get fully into the hell of the tsunami and all the destruction it left behind.

This Swedish film swept awards in 2014 thanks to an incredible but true story. It shows the experiences of a family that was in the snow and, while they have breakfast on the terrace, there is an avalanche. The father runs off to save himself, while the mother worries about saving her children. That flight from the man at such a critical moment makes his marriage falter.

1974 film directed by Mark Robson in which actors of the stature of Charlton Heston, Ava Gardner or George Kennedy were facing a great earthquake and the alarm that that supposes.

It would be a sin to talk about movies about cataclysms and threats to Earth and not start with the classic Armageddon. Directed by Michael Bay, recognized as one of the best directors in the filming of action scenes and explosions, Armageddon was released in 1998.

The film is about the approach to Earth of a large meteorite that threatens the destruction of the planet and the imminent extinction of humanity. From NASA they try to avoid it by reaching a conclusion: the only option is to destroy it before it collides with the planet. To do this, an expert team, led by Harry S. Stamper (Bruce Willis), will be sent on a space shuttle to the meteorite, where their mission will be to drill it to introduce a nuclear charge that destroys it before it hits Earth.

Tornadoes and hurricanes have gone a long way in the world of cinema and television, in this case for a film that is already a classic on the subject. Released in 1996, it tells the story of two teams of storm chasers who find themselves in the midst of a brutal tornado wave.

This 2015 film focuses on the tsunami in the Tajford Fjord in Norway in 1934. It shows a family trying to reunite and survive a catastrophe of such magnitude. One of the best movies about natural disasters that shows that not only Hollywood knows how to make them big and with quality.

Another classic 90s of the genre and director Roland Emmerich's first attempt to destroy planet Earth. His career has made us see that one of his favorite hobbies is to stage how our world looks between survival or extinction.

Independence Day is one of the reference films in terms of alien invasions. With a fabulous technical display for the time and that does not age with the passage of time as quickly as it should, Emmerich presents to us as a good day numerous alien ships land on the earth's crust in places as emblematic as the Egyptian pyramids with the Eagerness to colonize it.

Coinciding with July 4, United States Independence Day, humanity will have to overcome this threat, forgetting their differences, collaborating and joining their military forces in an almost suicidal mission commanded by Captain Steven Hiller (Will Smith).

Fire can wreak havoc in just a few minutes, and that can be seen in many movies and, unfortunately, in many real events. This film shows a firefighter who must calm the flames of a fire that has turned into a real hell.

It is the latest fashion in film and television, zombies. Although it is not exactly a disaster of nature we could consider World War Z a movie worthy of being on this list.

In the film, a virus threat is eradicating the human race. Gerry Lane (Brad Pitt) receives a call from a friend of his at the UN to help him solve the problem. In exchange, his family may receive asylum from the Organization.