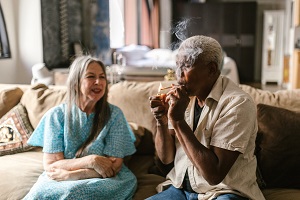 Medical marijuana is used to treat illnesses or disorders by using the marijuana plant or its compounds. It's essentially the same as recreational marijuana, except it's used for medicinal reasons. Cannabinoids are a group of compounds found in marijuana plants that number in the hundreds. Each has a distinct influence on the human body. The major compounds utilized in medicine are delta-9-tetrahydrocannabinol (THC) and cannabidiol (CBD). When individuals smoke marijuana or eat foods containing THC, they get a "high." If you want marijuana delivered to your house because you cannot purchase from the store, due to disability or other reasons then, Dube Delivery can help you a lot by delivering medical marijuana to your door steps and help you benefit from the medical uses that marijuana has.

What are your thoughts about it?

You can use medicinal marijuana in the following ways: It should be smoked. Inhale it using a vaporizer, which transforms it into a mist. Eat it in a brownie or a lollipop, for example. Use it as a lotion, spray, oil, or cream on your skin. Using a dropper, place a few drops of liquid under your tongue. It's entirely up to you how you handle it. Each approach affects your body in a distinct way. "You feel the effects very fast if you smoke or vape cannabis," Bonn-Miller explains. "It takes substantially longer if you consume it. The effects of edible goods might take anywhere from 1 to 2 hours to manifest."

Is medicinal marijuana authorized by the FDA?

Epidiolex, a cannabinoid, was licensed in 2018 to treat seizures linked with Lennox-Gastaut syndrome and Dravet syndrome, two uncommon and severe types of epilepsy. Furthermore, the FDA has approved the use of dronabinol (Marinol, Syndros) and nabilone (Cesamet) to treat nausea and vomiting caused by chemotherapy.

According to WebMD: "State laws differ on the conditions that you can legally treat with medical marijuana. But you might be allowed to use it if you have Alzheimer's, ALS, cancer, Crohn's disease, epilepsy, seizures, hepatitis C, AIDS, glaucoma, multiple sclerosis, posttraumatic stress disorder, chronic pain, or severe nausea." It is also dependant on State laws with some States also allowing use for yet further conditions, including autism; and the list is likely to grow with evidence of benefit growing for benefit in anxiety and sleep disorders, in particular.

Is medicinal marijuana effective in the treatment of seizure disorders?

When parents claimed that a specific kind of medical marijuana helped manage seizures in their children a few years ago, it drew a lot of attention. Epidiolex, a CBD-based medicine, was recently authorized by the FDA as a treatment for persons with severe or difficult-to-treat seizures. Some persons had a significant reduction in seizures after using this medicine, according to research.

Cannabinoids, the active ingredients in medicinal marijuana, are related to hormones that regulate hunger, memory, movement, and pain in the body. Cannabinoids, according to limited studies, may: Reduce your anxiety levels., Relieve pain and reduce inflammation, Control cancer chemotherapy-induced nausea and vomiting, Cancer cells are killed, and tumor development is slowed. People with MS should relax their tense muscles. In cancer and AIDS patients, stimulate appetite and help them gain weight.

After reading this article, now you know everything about medical marijuana as well as its uses. All you have to do now is purchase it and smoke it, after first obtaining a prescription where necessary of course