Posted by Maff Posted on Monday, 01 October 2018 in EirBlog 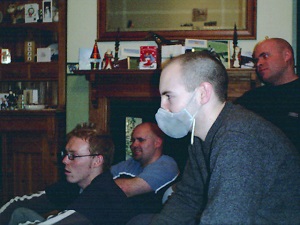 In 2000 I went through the horrible experience, as you no doubt have, of developing multiple chemical sensitivity (MCS). It was a familiar story recounted by other 'MCSers' in which I first became sensitive to my family's deodorants and perfumes, I was just 21 at the time and still living at home. After that it was laundry detergent, fabric softener and my dad's cigarette smoke that lingered on his clothes. From that point on, over a period of around three months, I became sensitive to just about everything; all of the chemical products in the house, the gas hob / stove and central heating boiler fumes. I couldn't even escape to the outdoors as I eventually became sensitive to vehicle exhaust fumes and the scents worn by passers by. If you're reading this I have no doubt you can relate!

This is not a blog about my struggles and suffering however, I'm writing this post to give everyone battling MCS hope.

I'm able to do this as I fully recovered from MCS with my last reaction now being 12 years ago back in 2006. I can't say it was an overnight recovery, it took time, effort and a lot of trial and error, but I'm now able to live "normally" again and the fears of having any sort of reaction are a distant memory.

I went from being a hermit in the few rooms of my house that were "safe" - the living room and bedroom - and having to wear a carbon filter mask or respirator, to once again being part of the human race and being able to work, socialize and enjoy experiences such as vacations as the "normals" do. At one point this seemed a very remote possibility as I showered wearing my face mask assuming this would be my life forever. Thankfully this was not to be the case and although many will say "you can't recover from MCS", I'm here to let you know that you most certainly can!

So How Did I Recover from Multiple Chemical Sensitivity?

Firstly, I did a lot of reading. Although there was a lot less information available than there is now. Luckily, I happened to stumble across exactly the book that would guide my recovery. That book was 'Chemical Exposures: Low Levels, High Stakes' by environmental illness pioneers Nicholas Ashford PhD and Claudia Miller MD. It's a book I'd recommend all affected by MCS read as although it's now a little dated (it's since been revised) it explores chemical exposures and MCS in great detail and from a scientific perspective as you'd expect given the authors' credentials. The key for me was towards the end of the book where the authors explored various theories for the etiology of MCS and introduced me to the concept of 'limbic kindling' - which has since become the subject of countless studies, not just into MCS, but the whole gamut of environmental and invisible illness. It's often referred to by various names including limbic sensitization, amygdala hypersensitivity and central sensitization (referring to brain and central nervous system) - so look out for those.

Anyway, the description of the process and symptoms in the limbic kindling section struck an immediate chord with me and I had an "ah ha!" moment. From then on, this knowledge guided my recovery and has since been the basis of recovery programs including the Gupta Program and Annie Hopper's Dynamic Neural Retraining System (DNRS). However, these weren't around when I was finding my way out of MCS, so I had to use trial and error and educated guesses to get there.

Without going into minute detail of my entire experience, below are the key factors I believe led to my recovery:

These 5 things were essentially my template for recovery. In the case of chemical avoidance, it's essential you are strict with this. I removed ALL synthetic chemical products from my home, using only pure natural soap to clean myself, white vinegar for home cleaning, and soap nuts for laundry. That's it. I also wore my carbon filter mask from icanbreathe.com in my bathroom and kitchen (I still reacted in those rooms - still don't know to what) and whenever I was around other people or outdoors. The latter was certainly very character-building as I'm naturally a shy individual and was suddenly getting stared at wherever I went!

I said in the intro it wasn't an overnight recovery and it probably took 2 years of following the above method to become MCS free but when I noticed things were definitely starting to improve with reactions becoming less frequent and severe, the MCS actually disappeared as quickly as it had developed - roughly 3 months from acute MCS to no reactions at all.

So that's my story. I went on to gain a degree in Nutritional Therapy, qualified in Hypnotherapy and Neuro-linmguistic-Programming (NLP) as well as continuing to run The Environmental Illness Resource. I also met the girl who would become my wife, bought a house and now have an amazing 1 year old daughter!

Perhaps what worked for me will not be so helpful for you; but at the very least I hope that this post will have given you, well, hope! MCS does not have to be forever and it is most certainly possible to recover. My wish is that you too can again experience living a normal life, free from worrying about every little exposure. Although of course, lessen learned, I continue to avoid exposures as much as possible and now use natural products whenever possible.

Other Options for MCS Recovery

Although I was able to recover through my own means based on research of various kinds (books, research papers, websites) and trial and error of every nutritional and herbal supplement under the sun, there are reports of other ways in which people have recovered from MCS, and many of you might want or need a more structured approach.

While it no doubt sounds counter-intuitive to use medications (chemicals) to recover from chemical sensitivities, some people have done just that. Even in our forums we have had posts from people reporting that they used drugs such as anti-anxiety or anti-psychotic medications that resulted in full MCS recovery. It does make sense when you actually think about the process of limbic sensitization being at the root of MCS, since these drugs act to reduce the activity of the central nervous system (CNS) which is exactly what is required. If you're open to this possibility or have tried everything else without success, it may be an option. Here's a forum post from one of our members reporting quick recovery using the anti-psychotic Amisulpride. Others have had less success however, with this member initially finding benzodiazepines helped with MCS but subsequently running into trouble.

In recent years 'brain retraining' programs have become very popular and Annie Hopper was able to heal her own MCS before going on to develop the Dynamic Neural Retraining System (DNRS) which uses a combination of techniques from the likes of NLP, gestalt therapy (ADD FEW MORE!!) and others. Going by reports from MCS patients online on website forums and Facebook Groups et cetera, DNRS does seem to lead to full recoveries for some (but of course not all). Having got hold of a copy of the DNRS DVD series myself and watched it through, I believe it's an entirely logical and potentially successful option. Annie certainly knows her stuff and her system offers the prospect of recovery from not just MCS, but a wide range of invisible illnesses and others. If you require a very structured approach then the DNRS DVDs or seminars (if you're able to attend) could well be for you. I think if I developed MCS now and didn't know where to even begin in understanding and treating it, I'd probably start here.

MCS is a very serious, life-changing illness and until the medical establishment fully accepts it and begins to seriously research it and bring forward effective therapies we are on our own. The world is starting to go in the right direction with more natural and unscented products and policies but there's a long way to go yet and people will continue to develop MCS.

I sincerely hope this post has gone some way to giving you a more positive outlook and the belief that you too can overcome MCS. I will sign off by re-iterating that you can get well and wish you a happy, MCS-free future!