Posted by Maff Posted on Wednesday, 12 May 2010 in EirBlog

I feel I must apologise for my recent lack of blogging activity but I'm sure when I explain why you'll understand - plus the reason has given me the inspiration for this post!

As regulars will be aware I have suffered from Chronic Fatigue Syndrome (ME/CFS) for a long time - since I was 11, so 20 years now. Like many ME/CFS sufferers I am also burdened by adrenal fatigue, low thyroid function, hypoglycaemia, Candida and Small Intestinal Bacterial Overgrowth (SIBO) amongst other things. I also suffered from severe Multiple Chemical Sensitivity for a number of years in my early 20s but thankfully was able overcome it (touch wood)!

Like most suffering from environmental illnesses (or more appropriately here 'invisible illnesses') I have been constantly frustrated by the absence of any abnormal findings on conventional medical tests over the years. After all, if the standard lab tests are normal there can't possibly be anything wrong with us in the eyes of the average doctor - or perhaps we are just too difficult to deal with.

Recently however something significant did show up in some routine blood tests I had carried out by my GP. Ultimately however I once again ended up frustrated at the medical system here in the UK.

I had attended the doctor's surgery in an effort to obtain some form of evidence for the long-standing liver impairment I know to be present from my symptoms and various functional testing I have had carried out privately (e.g. detoxification profiles, toxic exposure profiles, intestinal permeability assessment etc). I described my symptoms of chronic, dull pain just under my rib cage on the right hand side, intestinal pain on passing stools, stool colour ranging from white to yellow and orange (not a healthy brown), fatty stools, yellowing of the skin (jaundice) etc. Credit to my GP as he always listens and subsequently examined me which involved palpating (pressing) on my body at various points around the liver, gallbladder and intestines. I indicated that the most pain was felt the close he pressed to the liver and gallbladder area. He subsequently ordered a standard liver enzyme blood test - the results of which came back well within normal ranges. Nothing I hadn't expected as low grade liver impairment and inflammation just won't show up on these tests - they look for enzymes released by hepatocytes (liver cells) when they die so only show up when major damage is currently being done to the liver as in alcoholic liver disease or viral hepatitis.

However, my GP also ordered a full blood count as a matter of routine and lo and behold it came back with findings that could not be ignored - my total leukocyte (white blood cell) count was officially low as were numbers of neutrophils and monocytes (vital players in the innate immune response - our first line of defence against infectious disease) and lymphocytes (white blood cells involved in acquired immunity that recognises and attacks specific targets). Here are those results: 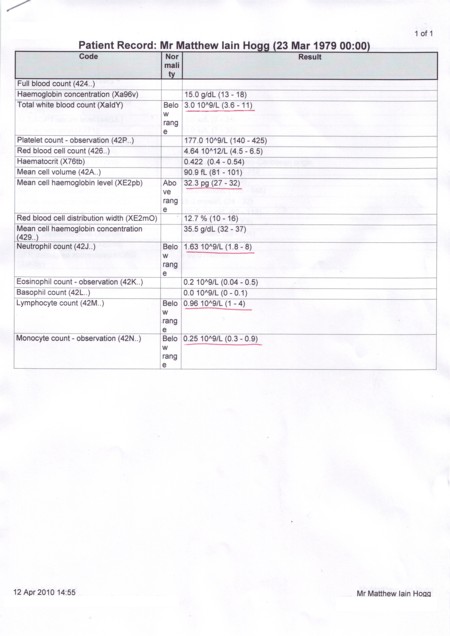 On previous blood counts over the past 10-15 years all these results had been hovering just inside the bottom of the 'normal' range so no notice had been taken. This was the first time there had been obvious abnormality and signs of substantial immune impairment so my GP had no choice but to order a retest. Unfortunately, or fortunately depending on how you choose to look at it, the second set of results put me back just within normal range so no further action has been taken.

Now at this point I'd just like to point out what a great example this is of medicine not following the basic principles of science and being more concerned with finances and resources than the health of patients. Put simply I had two blood counts, one showed undeniably low leukocytes and one showed borderline levels. Now how can you make a decision not to take further action when you have one abnormal and one normal (just) result to work from? Not to beat about the bush - you can't! Scientists repeat tests over and over so they can see patterns in results. At the very least a doctor would need a third test to make any kind of reasonable decision about the status of my leukocytes and my immune  system. Unfortunately that is not how things work within the National Health Service (NHS) in the UK and most conventional medical systems around the world. A test is just a snapshot - if blood was taken again today my results may very well be low again.

So what could have caused my leukocytes to be low on the first blood count? Well as I've just touched on a blood test is just a snapshot at a particular time and everything in the human body tends to show some natural variation throughout the day and night (diurnally) and over longer periods such as seasons. This is particularly true when you have a chronic illness such as ME/CFS. It may be that I have had low leukocytes on many occassions and this is just the first time it has coincided with me having a blood test. However, there are a couple of factors that immediately spring to mind that I think may account for the result at this time - stress and sugar.

As some regular readers will know, I am currently completing a bachelors degree in nutritional health and at the time of the test I was hugely stressed with writing my dissertation and another essay. This towards the end of a demanding final year with a lot of other work already having taken a lot out of me. My stress levels had also recently been chronically high due to ongoing problems with keeping this website online and running smoothly!

Stress is a factor that should not be dismissed in any disease. Over the past century scientists have gradually unravelled the links between stress and disease. Pioneers such as Hans Seyle in the 1950s showed how the body responds to stressful events by triggering the release of adrenal hormones, adrenaline and noradrenaline in the short-term and cortisol in the longer-term. With the advent of the branch of medicine known as psychoneuroimmunology it has now been established that each system within the body (immune, endocrine, nervous etc) rather than acting independently is in constant bidirectional communication with each of the other systems. As such stress is perceived by the brain/nervous system, which tells the endocrine to secrete various hormones, which bind with receptors on immune cells and direct its action. Unfortunately it is now established that chronic stress through the actions of cortisol and other hormones and hormone-like chemicals (neuropeptides) has the effect of suppressing immunity.

Other factors such as the food we eat can also significantly impact immunity.  One dietary component which is particularly detrimental to the immune system is sugar. Unfortunately during the writing of my dissertation I was in the situation where I either had to give up or rely on a regular sugar fix (mainly from sugary drinks) to keep my brain working and my energy levels up. Ironic I know given my medical conditions and the fact I am studying nutrition - but having tried various more natural solutions to limited effect I was left with no choice if I was to meet the university's inflexible deadline. Rest assured I would not advise anyone do the same but I am extremely stubborn and there was no way I was going to risk my high grade average or drop-out of the course at this late stage! I know I can help myself and others with the knowledge and experience I've gained in the future so I had to get through the course by any means possible. Back to sugar itself - simple sugars in their various forms including glucose, fructose and sucrose have profound effects on leukocytes and immunity. The vast majority of various sugars from the diet are converted to glucose in the body - glucose being the type of sugar in the blood that is primarily used as fuel for the cells. Eating a diet high in sugar leads to high blood glucose levels which in turn increases the production of free radicals and other  damaging chemicals such as advanced glycation end-products (AGEs) in the body. These chemicals can cause miscommunication between immune cells and the activation of genetic transcription factors such as Nuclear Factor KappaB (NF-KappaB) which has potent effects on immune cells and has been linked to viral infection, inflammatory and autoimmune disease, and cancer. Studies have shown high doses of sugar can reduce the ability of leukocytes to engulf bacteria in a process called 'phagocytosis' by up to 50%.

Stress combined with consuming large amounts of sugar therefore has the potential to lower both numbers of immune cells and their ability to function correctly. I'd urge everyone to look into the effects of stress and sugar consumption on immunity in more detail as it's both a fascinating subject and knowledge we as environmental illness sufferers can use to avoid negative influences on our health.

So, one again, please do not do as I did and take on the amount of work a degree course entails and then resort to sugar to get you through it as I did. I can assure you I am now back to a low carb diet and and meditating more than ever and taking walks in the countryside to manage my stress levels amongst other things!

If you suffer from ME/CFS or other environmental/invisible illness and have had some abnormal test results or you always get normal results despite feeling lousy and would like to vent your frustration please leave a comment below. Also if you'd like to discuss factors that impact on immunity go ahead and leave a comment too...