Coca-Cola Life: Not The Healthy Choice It Appears To Be

Posted by Maff Posted on Thursday, 15 January 2015 in EirBlog 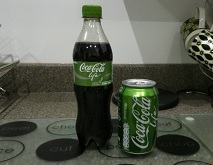 When I started to see the supermarket shelves stocked full with new green Coca-Cola bottles branded with the name 'Life' towards the end of last year, and moreover seeing that it used the natural plant-based sweetener stevia (steviol glycosides), I was all set to heap praise on The Coca-Cola Company. I even purchased a few of the products right there and then with this positive intent and planned try to this new "healthy" Coke for myself. Sadly when I got home and actually read the label, there was a nasty surprise.

Admittedly, as a health conscious consumer I should have checked the label before making the purchase; perhaps I was in shock that a major producer of traditionally highly sugary drinks was even aware of stevia! In any case, my impulse buy led me to the discovery that rather than being a cola drink sweetened purely by natural means - the misleadingly named Coca-Cola Life is in fact still packed with sugar with all the health risks such as Type 2 Diabetes (T2D), tooth decay and others less obvious.

A single 250ml bottle (pictured) contains 17g of sugar which is 19% of the total daily recommended sugar intake of an adult based on UK government guidelines. The 330ml can (a relatively small can in the soft drinks market) contains 22g which is 25% - yes, a full quarter - of the daily recommended maximum. It's worth remembering that these are the adult guidelines since those for children are significantly lower, and let's face it, children make up a large proportion of the market for soda drinks like cola!

The Coca-Cola Company points out on the label that thanks to the use of stevia extract the product contains 33% fewer calories than equivalent full sugar cola in Great Britain. This may well be the case but there's still a whole lot of sugar in this product that makes the branding 'Life' and the very green packaging rather cynical. Nobody educated in nutrition could possibly recommend this product as part of a balanced, healthy diet and with only 33% fewer calories than regular cola its credentials as a choice for weight loss aren't exactly glowing.

Without further serious digging I can only speculate as to why Coca-Cola admirably chose to create a "healthier" variety of their famous and beloved product sweetened with stevia, only to then sabotage it by throwing in a hugely detrimental amount of sugar as well. Perhaps the taste with stevia alone wasn't "right" and market research pointed this out or maybe UK or European law only allows a certain amount of stevia at present - I know that it was not allowed to be sold at all in the past due to a lack of safety research.

Whatever the reasons for the final formulation of Coca-Cola Life including so much sugar, it leaves a bad taste in my mouth (figuratively speaking), with the branding clearly giving the impression that it is a healthier alternative than it actually is.

I guess some credit should be given for the fact that stevia has been used in place of artificial sweeteners (typically aspartame) found in most diet / light soft drinks. Aspartame is a chemical that has been the subject of multiple research studies - some showing neurotoxic effects such as increasing the risk of mood disorders and learning impairment (Nature) and others even linking it to various cancers (Environmental Health Perspectives).

I really wanted to praise The Coca-Cola Company for their forward thinking and health conscious adoption of stevia as a sweetner in their cola drinks, and I suppose this product is at least a good start. As it is I am left rather disappointed and intentionally mislead by Coca-Cola Life. Let's hope in the future they manage to come up with a formulation that is truly worthy of the name 'Life'.

Of course in terms of good health and perhaps shedding a few pounds the best choice you can make is to drink plenty of water with the odd glass of freshly squeezed fruit (or vegetable) juice - but that's a topic worthy of another blog post entirely!

posted by Maff on 11 October 2007
Why some people get spots and others don't: Scientists discover the 'bad' bacteria that gives us blemishes
3 comment(s) 53721 hits Read More

Guest - Nicci Skincare
Thank you so much for these insights, you're gonna change so many lives!
5 Ways to Help Treat the Most Common Addictio...
about 10 months ago

YoungHope
One of the big mistakes people make is trying to force themselves to be concerned about something. Y...
5 Ways Mindful Meditation Can Help You Hone Y...
about 11 months ago