Increase Glutathione: 5 ways to restore this major antioxidant and detoxifier to healthy levels

Posted by Maff Posted on Tuesday, 20 March 2012 in EirBlog 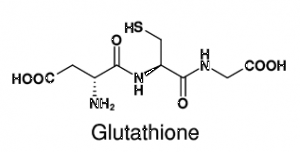 Glutathione (GSH) is a small tripeptide molecule (composed of 3 amino acids) that plays a big part in detoxifying the body of harmful substances and protecting it from reactive oxygen molecules such as free radicals in its role as an antioxidant. The three amino acids that combine to form glutathione are cysteine, glycine and glutamic acid.

Glutathione is a major player in the Phase 2 (conjugation) detoxification system which is primarily active in the liver. Molecules of glutathione are "conjugated", or joined, to toxins that have either passed through Phase 1 (cytochrome P450) system to prepare them for conjugation, or to substances which are already amenable to joining with glutathione. Once glutathione conjugation has taken place the toxins can be safely and easily excreted from the body.

As an antioxidant glutathione directly neutralizes free radicals and other reactive oxygen molecules like peroxides. In addition to this it also plays a role in maintaining levels of other important antioxidants including vitamin C and vitamin E.

Glutathione is primarily utilized in the detoxification of xenobiotics (foreign substances) - that is, toxins that have entered the body from the environment. These toxins may be in the form of pesticides or perfume we inhale, heavy metals like mercury that we consume in food (particularly certain fish), chemicals in our drinking water (e.g. chlorine & contaminants), and even medications prescribed by our doctors.  Since glutathione is depleted by acute or chronic exposure to large amounts of xenobiotics, it will come as no surprise to find that those suffering from environmental illnesses including multiple chemical sensitivity (MCS)1, chronic fatigue syndrome (ME/CFS)2, and fibromyalgia3 have all been found to have unusually low levels of this vital detoxifier.  With this being the case there is a logical rationale for trying to boost glutathione levels if you suffer from any illness caused by, or involving, exposure to environmental toxins.

Luckily there are a number of cheap and easy methods that are quite effective at achieving this. Here are five of the best:

1. Supplement Amino Acids - Glutathione supplements are available but are ineffective since glutathione is broken down in the digestive process. It therefore makes sense to supplement the three amino acids, cysteine, glycine and glutamic acid, that the body needs to manufacture glutathione. Cysteine is the "rate-limiting" amino - put simply it runs out first - so is the most important to supplement. Studies have shown that the n-acetyl-cysteine (NAC) form is more effective than l-cysteine. Undenatured whey is also an excellent source of cysteine. Learn More.

2. Supplement Glutathione "Recyclers" - As mentioned above glutathione plays a role in keeping levels of vitamins C and E in their antioxidant ("reduced") form. The relationship works both ways however so supplementing with vitamin C and vitamin E (as mixed tocopherols) can help keep your body's supply of reduced glutathione at healthy levels. Additonally, alpha lipoic acid (ALA) also recycles "used" (oxidized) glutathione back to its reduced form ready to do its job all over again. Learn More.

3. Use Glutathione-Boosting Herbs - Medical researchers have discovered numerous herbs that have the ability to raise levels of glutathione within human blood and cells. They achieve this through various mechanisms and some of the best known and/or with the most convincing research behind them include silymarin (milk thistle), dandelion, and burdock. A lesser known but very effective alternative is known as Tribulus terrestris. Learn more.

4. Correct Methylation Cycle Problems - The methylation cycle is a vital cycle of chemical reactions in the body that operates by passing methyl groups (CH3) from a donor compound to an acceptor. The cycle is important for among other things, neurotransmitter metabolism, DNA/RNA synthesis...and production of glutathione. The methylation cycle relies on adequate supplies of folic acid and vitamin B12, and to a lesser extent tri-methyl glycine (TMG) - a methyl donor. Vitamin B6 is required for the pathway that results in glutathione production. To help raise glutathione levels then, it is worth environmental illness sufferers making sure they have sufficient folic acid and vitamins B12 and B6. If not then supplementation may help considerably - see Rich Van Konynenburg, PhD's protocol.

5. Lifewave Glutathione Patch - Finishing on a controversial one here but I personally feel that these patches do indeed raise glutathione levels significantly. I base my conclusion purely on my own personal experience as I went through a classic "detox" reaction with symptoms including nausea, heachache, weakness, and generally feeling toxic and flu-like within 15 minutes of applying the patches the first few times of use. This reaction is consistent with what one would expect to happen if glutathione levels were rapidly raised within the body and toxins liberated by the extra glutathione as a result. These patches are however controversial, mainly due to lack of independent research and the way in which the company is run and the patches sold. In any case, you can read my experience with the Lifewave Glutathione Patch in more detail and find out how to purchase them here.

While not included above I feel it would be remiss of me not to mention the nutritients phosphatidylcholine (PC) and s-adenosyl-methionine (SAMe) when discussing glutathione as both have a substantial number of studies backing their ability to raise glutathione levels within the body.