Silver bullet for cancer: Metal can kill some tumours better than chemotherapy with fewer side effects

Posted by Bushi Posted on Sunday, 05 February 2012 in EirBlog

Silver can kill some cancers as effectively as chemotherapy and with potentially fewer side effects, new research claims.

Scientists say that old wives tales about the precious metal being a ‘silver bullet’ to beat the Big C could be true.

The metal already has a wide range of medicinal uses and is a common antiseptic, antibiotic and means of purifying water in the third world. 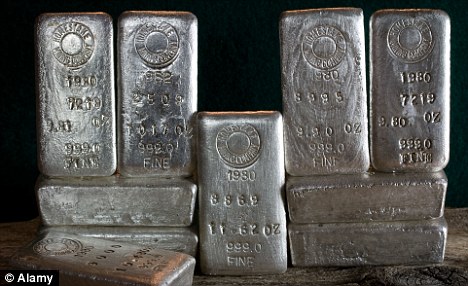 Good news: Silver can kill some cancers as effectively as chemotherapy and with potentially fewer side effects, new research has claimed

And British researchers now say that silver compounds are as effective at killing certain cancer cells as a leading chemotherapy drug, but with potentially far fewer side-effects.

They compared it to Cisplatin, currently used to treat a wide variety of cancers, but known to have harsh side effects including nausea, vomiting and even kidney damage.

Silver is used already in everyday products such as deodorant with no known side-effects, and could make for a potentially cheaper alternative to platinum-based Cisplatin.

Researchers from the University of Leeds conducted lab tests which exposed breast and colon cancer cells to various silver-based chemicals over a six day period.

Results, published in journal Dalton Transactions, showed that these silver-compounds were ‘as effective as Cisplatin’ at killing cancer with potentially fewer side effects.

While the team are still unsure about how exactly silver battles cancer, they think its effectiveness may be caused by the structure surrounding silver atoms, known as its ligand. 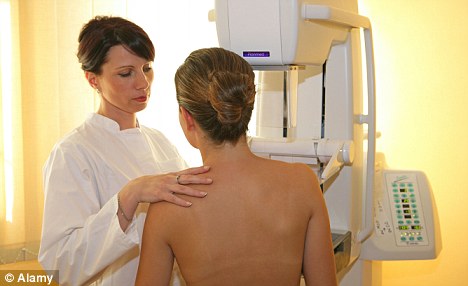 Way forward: Researchers from the University of Leeds found that silver could be used to help defeat breast cancer

They think this may help release the silver ion into cells when it enters the body, killing any cancer.

Study author Dr Charlotte Willans plans to spend the next year looking closely at what effect silver has on both cancerous and healthy cells, and whether it could be a safe and effective new anti-cancer drug.

She said: 'It’s certainly an exciting discovery, although I think we have a lot of work to do in the future. It opens the doors in terms of what we can do and investigate.

'Getting these results also gives us the opportunity we need to apply for funding to take the research further.

'This could lead to a cheaper, less toxic alternative to current treatments for cancer.'

Explaining the research in greater detail, Dr Willans added: 'As many are unfortunately aware, chemotherapy can be a very gruelling experience for the patient.

'Finding effective, yet non-toxic drugs is an ongoing problem, but these preliminary results are an important step in solving it.

'Our research has looked at the structure which surrounds a central silver atom. This "shrubbery" is what determines how reactive it is and what it will interact with.

'Our research has used different types of these ligands to see which is the most effective against cancer cells.'

Bushi
Bushi has not set their biography yet
Author's recent posts

posted by jollieplace on 31 January 2010
Why some people get spots and others don't: Scientists discover the 'bad' bacteria that gives us blemishes
3 comment(s) 52908 hits Read More

YoungHope
One of the big mistakes people make is trying to force themselves to be concerned about something. Y...
5 Ways Mindful Meditation Can Help You Hone Y...
about 2 weeks ago

Guest - Matt
Eight years after contracting EBV and two years after coming down with CFS I'm giving nimodipine a t...
Nimodipine: Treatment for Chronic Fatigue Syn...
about 2 months ago

Guest - Julia fuhrmann
Hi I started the drug nimtop at the suggested dose 1/4 tablet I'm scared to proceed because it made ...
Nimodipine: Treatment for Chronic Fatigue Syn...
about 3 months ago

Guest - Emme Eve
Very useful information! One of the best ways to handle mold is to prevent it from entering the home...
5 Step Environmental Mold Removal
about 3 months ago