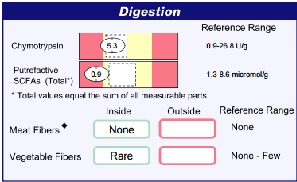 It is an inesacpable reality that the health of the entire body is compromised if the gut and digestive organs are not healthy. For example, insufficient production of stomach acid, bile, and/or digestive enzymes results in inadequate digestion which can lead to nutrient deficiencies and increased risk of food allergies and intolerances. The composition of micro-organisms which make up the gut flora is now also recognised as being pivotal to overall health; too many of the wrong kinds of micro-organisms can result in leaky gut syndrome and the absorption of large quantities of toxins and allergens.

With this in mind, many people suffering from ill health that has not been adequately addressed by conventional medicine choose to have a Comprehensive Digestive Stool Analysis (CDSA) carried out. This test is now available from a number of independant labs and involves the examination of a patient's stool sample to determine if the digestive system is functioning efficiently and if the gut flora are in balance.

If you have a CDSA performed your healthcare provider is likely to provide you with a copy of the results. These can be very confusing if you don't know what you're looking for so I thought it would be useful to many of you to have an overview of the CDSA results and what they actually mean. Since a number of CDSA type tests are now available from various labs the things they test can vary slightly. I will therefore try to cover as many of these as possible. There are a lot of markers to cover so this blog entry will look at markers of digestion and absorption. Other markers will be covered in subsequent entries.

Chymotrypsin
A protein-digesting enzyme produced by the pancreas. It is used as a global marker of pancreatic function. Levels of chymotrypsin below the reference range suggest the pancreas is not functioning optimally. This may result in an increased risk for the development of food allergies and intolerances due to the presence of increased amounts of dietary peptides, the products of incomplete protein digestion. Incomplete protein digestion can also increase the amount of undesirable microorganisms and their putrefactive metabolic products. Corrective measures may include digestive enzyme and betaine HCL (stomach acid) supplements along with recommendations to chew food carefully (to stimulate digestive secretions) and use stress management techniques if necessary, since the stress response compromises digestive system function.

Pancreatic Elastase 1 (PE1)
PE1 is used on some tests instead of or in addition to chymotrypsin. It is another marker of pancreatic funtion and overall production of digestive enzymes and therefore digestive capacity. It is often considered to be more accurate as results are not affected by digestive enzyme supplements. Levels above 200mcg/g are considered normal but should be no more than 500mcg/g. A PE1 result of 100-200mcg/g indicates mild to moderate dysfunction, while a result below 100mcg/g represents low pancreatic function that is moderate to severe. Low levels of PE1 suggest the same issues as low chymotrypsin and have also been associated with chronic pancreatitis, pancreatic cancer, gallstones and diabetes mellitus.

Putrefactive Short-Chain Fatty Acids (SCFAs)
There are three putrefactive SCFAs, valerate, iso-valerate, and iso-butyrate; all or some of which may appear on your CDSA test results. These SCFAs are the result of the anaerobic (without air/oxygen) fermentation of polypeptides and amino acids (the products of protein digestion) by bacteria in the intestines. Levels above the reference range are important to look out for as they can be an indicator of low stomach acid (hypochlorhydria) and/or low scretion of protein-digesting enzymes by the pancreas, poor absorption of protein due to inflammation/damage to the gut lining , or bacterial overgrowth in the small intestine (small intestinal bacterial overgrowth (SIBO)). If high putrefactive SCFAs are found treatment needs to address the underlying cause and may include betaine HCL and or digestive enzyme supplements, nutrients that aid healing of the gut lining, and antibiotic therapy (using drugs or natural alternatives) to eradicate bacterial overgrowth.

Meat Fibers
The presence of meat fibers in the stool is an indicator of incomplete digestion, particularly of protein. This may be due to simple reasons including excessive meat consumption, improper chewing of food, or rapid transit time, or it may indicate inadequate stomach acid or pancreatic enzyme production which would need to be addressed with supplementation. Of course, serious diseases such as cancers of the digestive organs also need to be ruled out.

Vegetable Fibers
Vegetable fibers may be present at abnormally high levels as a result of the same factors influencing meat fiber content. Both of these are often elevated when people "eat on the run" rather than sitting down and relaxing while they eat. The presence of vegetable fibers in the stool when considered in conjunction with the other markers discussed here can be another indicator of maldigestion.

Triglycerides
Most of the fats in our diet are in the form of triglycerides. These are broken down by an efficient digestive system into smaller fragments that can then be absorbed from the small intestine. If higher than normal levels of triglycerides are found in a stool sample it can be a sign that the digestion and/or absorption of fats is insufficient. Since both bile and the enzyme lipase, secreted by the pancreas, are required for fat digestion and absorption high faecal triglycerides may indicate inadequate secretion of these substances. This can result from problems with the liver (where bile is produced), gall bladder (which stores and secretes bile into the small intestine), or the pancreas. High faecal triglycerides can also result from low stomach acid, a high fat diet, or a fast transit time i.e. diarrhoea/frequent bowel movements. Symptoms associated with poor fat digestion and absorption include bloating, flatulence, feelings of fullness, pale and foul-smelling stools, and an "oil slick" in the toilet water after bowel movements. Treatment may include betaine HCL, digestive enzyme, and bile salt supplements along with a low fat diet and recommendations on reducing transit time e.g. stress reduction and increased fibre in the diet.

Steatocrit
This is a marker of the total amount of fat found in the stool. It is considered the most accurate method for obtaining this information from a single stool sample. A high steatocrit result is indicative of fat malbsorption and would suggest inadequate secretion of stomach acid, bile, and/or lipase. Symptoms that are likely to accompany a high steatocrit result are the same as those mentioned above for high triglycerides and treatment would also be the same.

Long Chain Fatty Acids (LCFAs)
These are types of fatty acids present in significant amounts in our diets. Examples include arachidonic acid (AA), which is abundant in saturated fats, and docosahexaenoic acid (DHA), and Omega-3 polyunsaturated fatty acid found in fish oil. Elevated levels suggest malabsorption of fats due to inadequate digestion, since LCFAs must first be broken down into smaller components before they can be absorbed.

Total Short Chain Fatty Acids (SCFAs)
SCFAs are produced from the fermentation of fibre and protein by certain components of the gut microflora. The SCFAs produced from the fermentation of fibre by probiotic bacteria such as Bifidobacteria and Lactobacilli have a range of beneficial effects from serving as a fuel for cells lining the intestine (and the rest of the body) to creating an acidic intestinal environment that is unfavourable to potential pathogens. Low levels may suggest that the diet is low in fibre and/or protein or there is an imbalance in the gut microflora. High levels might be due to a very high fibre and/or protein diet,  small intestinal bacterial overgrowth, or malabsorption, for whatever reason. Treatment will need to address these issues.

Cholesterol
Indicates whether cholesterol is being absorbed from foods efficiently. High levels suggest malabsorption. Other markers of digestion and absorption are likely to confirm this and point to possible reasons such as pancreatic insufficiency.

Total Fecal Fat
Some tests provide a "Total Fecal Fat" result which is often arrived at by simply adding the results for LCFAs, SCFAs, and cholesterol together. It can provide more information about how well fats and nutrients in general are being absorbed. It is important to remember that when fat digestion and absorption is impaired important fat-soluble nutrients such as essential fatty acids (EFAs) and vitamins A, D, and E will also not be absorbed well.

I hope this has made the digestion and absorption results of your CDSA a little clearer.

Interpretation of other CDSA Markers: