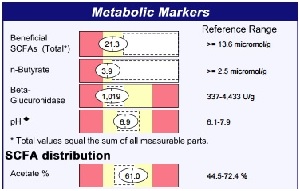 Continuing with my blog series aimed at helping you decipher the results of a comprehensive digestive stool analysis (CDSA), this week I will describe the various "metabolic markers" that might be referred to on your test results.


n-Butyrate
This short-chain fatty acid (SCFA) is produced as a result of the fermentation of dietary fibre, particularly gums and pectins, by certain bacteria that inhabit the intestines (particularly probiotic bacteria such as Lactobacilli and Bifodobacteria species). An n-butyrate level within the reference range is first and foremost then, an indicator that such health promoting bacteria are present in sufficient amounts. A low n-butyrate level in this respect may indicate a deficiency of beneficial bacteria while a high level suggests a general bacterial overgrowth caused by factors such as low stomach acid or high carbohydrate/fibre diets. In the former case probiotic supplements may be required while in the latter antibiotic therapy, whether drug-based or natural, may be needed.

n-Butyrate is the preferred fuel for the cells of the colon, helping to keep them healthy. In this role it helps to regulate the differentiation and proliferation of these cells and has been associated with a reduced risk of colon cancer. This SCFA is also important for controlling general inflammation of the GI tract since it reduces the production of pro-inflammatory immune chemicals such as tumor necrosis factor-alpha (TNF-a). Recent research has shown that through this mechanism n-butyrate may be helpful in digestive disease such as Crohn's disease and celiac disease.

If n-butyrate levels are low the suggested therapy is likely to be increasing fibre in the diet, particularly gums and pectins, and using probiotic and possibly butyrate supplements. Gums and pectins are found in large amounts in many fruits, particularly citrus fruits and harder fruits such as apples.


Beta-Glucuronidase
This is an enzyme produced by certain members of the gut flora including E. coli, Peptostreptococcus, Bacteroides, and Clostridia. Some of these are considered harmless while others are said to be pathogens. A high b-glucuronidase result is bad because toxins, hormones, carcinogens, and drugs which are normally bound to a compound called glucuronide in the liver and then excreted from the body in bowel movements can be freed by b-glucuronidase and reabsorbed into the body where they can contribute to disease.

Elevated b-glucuronidase levels can be reduced by using supplements including probiotics containing Lactobacilli and Bifodobacteria and calcium-D-glucarate, which inhibits b-glucuronidase production. Eating a high fibre diet and including apples, citrus fruits, and cruciferous vegetables (e.g. broccoli, cauliflower), which contain significant amounts of calcium-D-glucarate, can also be helpful.


pH
Normally the pH of the stool is slightly acidic due to bacterial fermentation and putrefaction of the intestinal contents. Beneficial bacteria such as Lactobacilli and Bifidobacteria produce large amounts of SCFAs such as n-butyrate which contribute to this slightly acidic intestinal environment and correspondingly slightly acidic stool oh pH 6-7.

A stool pH below 6.0 may be the result of a rapid transit time e.g. diarrhea, loose stools. If this is the case further investigations may be required to determine the cause which could be anything from food allergy or intolerance, bacterial, viral, or parasitic infection, or irritable bowel syndrome (assuming serious bowel disorders have been ruled out previously). A low pH may also be the result of small bowel bacterial overgrowth (SIBO) in which numbers of normal bacteria in the small intestine are present in much higher numbers than normal. This can result from a high carbohydrate diet, low stomach acid (see digestion and absorption markers), or reduced gut immunity, and is common in chronic fatigue syndrome (ME/CFS), fibromyalgia, and irritable bowel syndrome (IBS). For a fast transit time the underlying cause needs to be addressed and treatment therefore varies. SIBO needs to be treated with antibiotic drugs or supplements, or both, and a low carbohydrate diet adopted.


The most common causes of a high (alkaline) stool pH are deficiency of beneficial bacteria and therefore SCFAs and a diet that is lacking in fibre. This situation needs to be corrected with probiotic supplements and a high fibre diet as pathogenic microorganisms including bacteria and yeast (e.g. Candida) tend to thrive in an alkaline intestinal environment. Somes types of fibre including wheat bran, oat bran, and prebiotics such as fructooligosaccharides (FOS) appear particularly good at lowering intestinal pH. High pH has also been linked in a number of studies to an increased risk of colorectal cancer due to the actions of certain gut bacteria which can convert bile acids and possibly cholesterol metabolites into carcinogens.


Bile Acids
Bile acids are the final product of cholesterol metabolism in the liver. They cannot be considered solely as a waste product however as they play an important role in fat digestion and absorption. Bile acids become part of bile, the green substance that is secreted by the liver, stored in the gallbladder, and released during digestion. The primary bile acids are chenodeoxycholic acid (CDCA) and cholic acid (CA).

The problem is that these bile acids can be converted into secondary bile acids by anaerobic bacteria, such as Clostridium, Enterococcus and Bacteroides, in the colon. CDCA is converted into lithocholic acid (LCA) and CA is converted into deoxycholic acid (DCA). These secondary bile acids are associated with disease. An LCA:DCA ratio greater than 1 is associated with increased risk of gallstones, breast cancer, and colorectal cancer. LCA is considered to be most toxic as it inhibits glutathione-S-transferase, an important antioxidant enzyme produced by the body.

Interpretation of other CDSA Markers: