Following on from my blog - Pathological Detoxifiers and Environmental Illness which explained the process of detoxification in the liver and when someone might be termed a 'pathologicial detoxifier' - I wanted to share the results of my own Detoxification Profile and explain how the results related to my illness at the time and subsequent developments.

The Detoxification Profile uses caffeine, paracetamol, and aspirin, to determine how well phase1 and some of the most important phase 2 liver detoxification pathways are functioning. 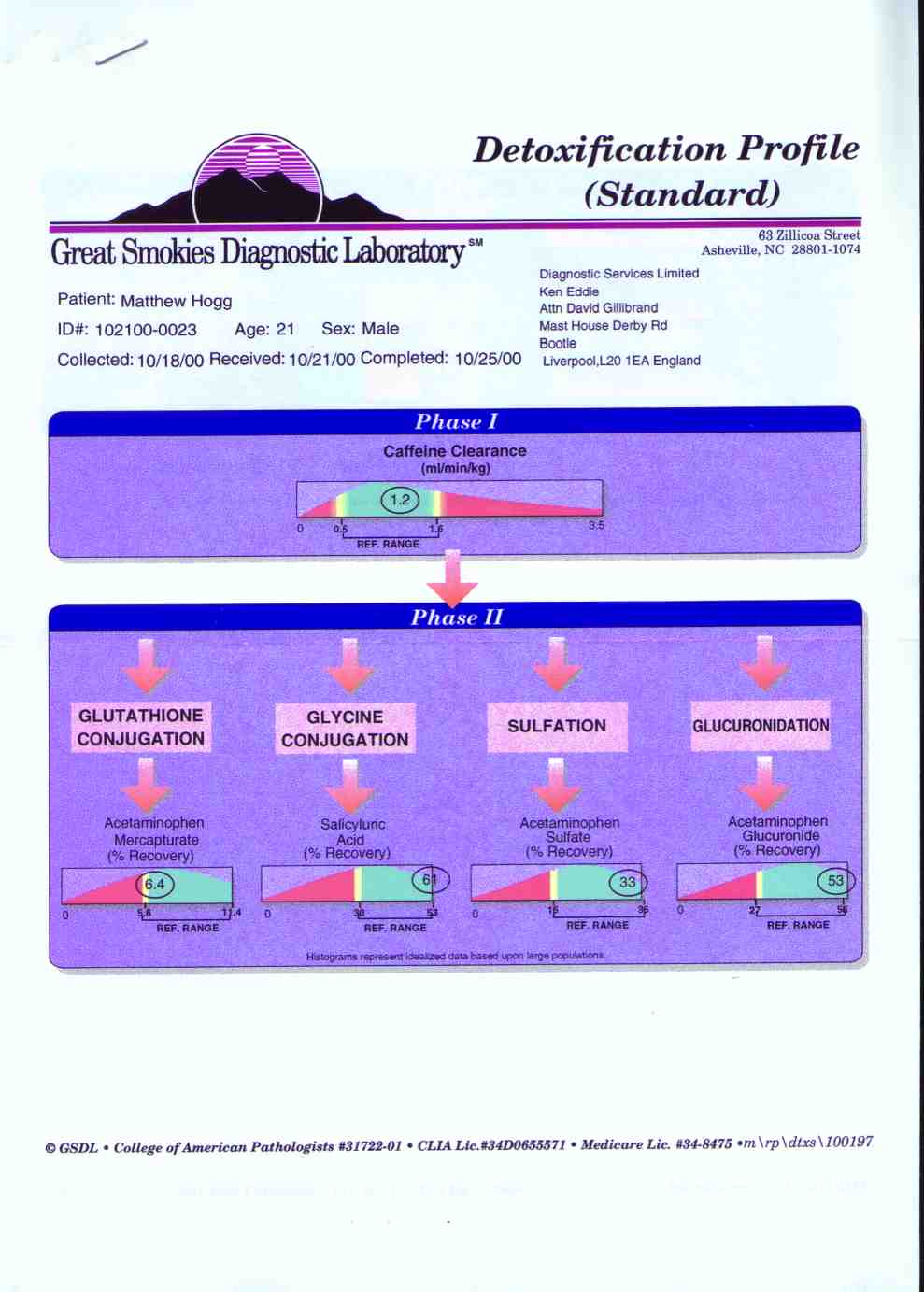 As you can see, although my phase 1 is within the reference range, it is towards the upper end of normal. In combination with this my phase 2 glutathione conjugation is borderline low. The other phase 2 pathways are all what Genova ,I believe, now classes as high and indicates increased toxic exposure.

Other testing revealed my d-glucaric acid was high (another marker of increased toxic exposure) along with a cysteine deficiency. Cysteine is the sulphur-containing amino acid that is not only a component of glutathione, but also dertermines the rate at which it can be manufactured by the body.

The trend towards increased rate of phase 1 detoxification coupled with that towards deficient glutathione conjugation suggests I was at the time a mild pathological detoxifier. Interestingly, I went on to develop multiple chemical sensitivity (MCS) just over a year after this detoxification profile was carried out!

At the time of the test I had suffered from chronic fatigue syndrome (ME/CFS) for 10 years and had been diagnosed with fungal type dysbiosis/intestinal Candida overgrowth by various doctors including Dr. Keith Eaton, a consultant allergist and respected researcher in environmental medicine, following a Comprehensive Digestive Stool Analysis (CDSA) by Great Smokies Diagnostic Laboratory (now Genova Diagnostics) and blood ethanol  levels testing by Biolab (UK).

It seems a logical hypothesis that my trend towards being a pathological detoxifier was caused by chronic exposure to ethanol, acetaldehyde, and other chemical waste products of Candida, the infection with which resulted from impaired immunity associated with ME/CFS. Glutathione is the major phase 2 pathway dealing with the detoxification of alcohol which would explain its depletion. Further testing at Biolab also showed increased activity of specific phase 1 cytochrome P450 enzymes that deal with alcohol, specifically CYP 2A and 4.

I believe anyone suffering from environmental illnesses or unexplained symptoms should have a Detoxification Profile done if they are not getting help elsewhere. There are many nutritional and herbal supplements that can be used to restore balance to the detoxification pathways, reduce the toxic burden on the body, and restore health if there is indeed an imbalance detected.

For information about treating imbalanced liver detoxification see this blog: