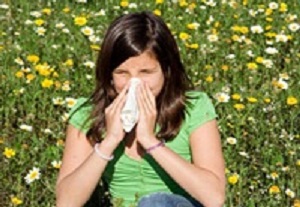 What is an Allergy?

An allergy is an abnormal immune reaction to everyday things. When you have an allergy, the normal immune reaction that protects your body from infection and other dangers occurs in response to things that don't pose any threat. Anything to which your immune system reacts, is called an 'antigen'. If your immune system becomes sensitized to a particular antigen, it will manufacture 'antibodies', that bind to the antigen; initiating the process that leads to the symptoms of allergy.

The antibodies that cause immediate allergies are known as IgE antibodies. The symptoms of allergy are due to a substance called 'histamine' being released from specialized cells known as 'mast cells' when they come into contact with immune complexes, antibodies bound to an antigen. Histamine is also released in smaller amounts from immune cells called basophils.

An allergic reaction can occur when an antigen is breathed in, eaten or even simply by coming into contact with the skin. The most common allergic illness is hay fever (allergic rhinitis), which is an allergy to pollens (and mold spores) and is most often seasonal as pollen levels vary throughout the year. According to Nathan et al, in The Journal of Allergy and Clinical Immunology, nearly 36 million americans suffer from hay fever.

Mold is an often overlooked cause of allergies and other illness. Homes and other buildings can easily become a breeding ground for mold if moisture and warm, dark conditions are not kept under control or rectified. Using a good dehumidifier can help keep mold allergy symptoms at bay and is a good investment, certainly worth looking into. You will find much more information on mold allergies and illness elsewhere on EiR.

The symptoms of allergy depend upon whether you are allergic to an airborne particle like pollen, a food, or something like an insect bite or an injected drug.

As well as these immediate and obvious allergy symptoms, allergies can cause any number of secondary symptoms, commonly including:

Allergic conditions including eczema and hay fever (rhinitis), along with asthma, are referred to as atopic conditions. Research has shown both that atopy runs in families and that people who have one atopic condition are much more likely to also have another.

This type of allergy, often called 'food sensitivities', does not involve IgE antibodies and the release of histamine which cause very obvious symptoms soon after the ingestion of a food. Instead they are the result of IgG antibodies becoming sensitized to certain foods. IgG antibodies don't cause the release of histamine but they do release other immune chemicals designed to inactivate or destroy invaders in the body. These chemicals can cause damage and resulting inflammation to your own body tissues in the process. As a result, they too can cause symptoms, especially if you develop sensitivities to a number of different foods. Symptoms from food sensitivities may appear up to 3 days after the offending food was ingested and last for weeks afterwards. Symptoms are wide ranging and can affect multiple body systems. Here are some examples:

Due to the fact that these symptoms may not appear for days after the triggering food was eaten they are often referred to as 'hidden allergies'. It is therefore difficult to pin down what is causing your symptoms. Another complication is that IgG allergies are not permanent, they are 'cyclic'. This means that if you don't eat a food you are sensitive to for a while it will no longer cause symptoms the next time you eat it. It also means that eating the same foods all the time will tend to cause a sensitivity to that food. The most common way to detect and treat food sensitivities is the elimination diet. If you keep a diary of what you eat and when symptoms appear it is possible to figure out which foods are causing problems. You can then eliminate these foods for a period of time, usually at least a month, to see if your symptoms improve. Another method is to start by eating a so called 'stone age' diet that is very basic. You may then add other foods back slowly, one at a time to see if they trigger symptoms. There are also lab tests available to test for food sensitivities, the most common these days being the ELISA test, which may be very helpful for some people but tend to be expensive. There is also some doubt over their accuracy.

Although this name is often used interchangeably with food sensitivity and delayed allergy, technically a food intolerance has nothing to do with the immune system and is therefore not an allergy or sensitivity. An allergy is a reaction by the immune system to a protein, you can't have a classical allergic reaction to anything but proteins. Intolerance's can be due to food components other than proteins. A food intolerance is due to the lack of a specific enzyme for the digestion of a certain food type. The most common is lactose intolerance which is due to the lack of the enzyme lactase which breaks down the sugar lactose, found in milk and milk products. Food intolerance's result in predominantly gastrointestinal symptoms such as:

Although food intolerance's don't tend to cause the wide array of multiple organ system symptoms associated with Environmental Illnesses, they too have been found to be increased in Environmental Illness sufferers. For example, In a paper by M.S.Gracey, published in Medical Bulletin Vol.37 in 1981, it was noted that amongst other things,overgrowth of bacteria in the gut leads to lactose intolerance.

Celiac disease is an autoimmune disease in which a T-cell mediated immune response results in damage to the tissue of the small intestine. This reaction is triggered by the ingestion of gluten, a protein found in grains, predominantly wheat, barley and rye.

The Role of Allergies in Environmental Illnesses

Classical (IgE) allergies are a major component of all Environmental Illnesses. Numerous investigations have found that the rate of allergies in CFS patients is significantly higher than in the population as a whole. According to the National Jewish Medical and Research Center in the US, allergies are present in 75% of CFS sufferers, compared to only 10-20% in general (see a related article here). Sufferers of all of the Environmental Illnesses often have a history of allergies before the onset of their illness and most develop new allergies after getting a diagnosis of CFS, Fibromyalgia etc.

Many researchers are coming to the conclusion that Environmental Illnesses, such as CFS, are the result of some kind of neuroimmune dysfunction, i.e. the nervous system/brain and immune systems aren't functioning correctly in sufferers. The main theory is that the nervous and immune systems are hyperactive and thus more sensitive to stimulation of any kind. This would explain why allergies are such an integral part of these illnesses, because as we have already learnt, an allergy is basically an overreaction by the immune system to what is a normal, non-threatening stimulus. There is a well established base of research indicating that the immune systems of environmental illness sufferers are shifted towards a T-helper type 2 response and away from T-helper type 1 activities (1, 2, 3)

A lot of recent research is also showing that the gut flora plays an important part in the mediation of allergies with people with disrupted flora having more allergies than those with a more balanced gut flora and probiotics being shown to reduce allergic reactions and symptoms thereof (4, 5).

As with classical (IgE) allergies discussed previously, delayed allergies/food sensitivities play a large role in Environmental Illnesses. This is due to the role that disturbed gut function plays in these illnesses. Gut dysbiosis leads to a leaky gut and when you have this situation you become far more likely to develop food sensitivities. Digestive enzymes may be damaged by pathogenic bacteria, or substances they produce, resulting in incomplete digestion of protein. As the gut has become more permeable (leaky) these large food particles are able to pass through the gut wall and eventually into the blood stream. Once in the blood, these proteins are likely to trigger a response from IgG antibodies and lead to symptoms. This has been shown in IBS patients for example, as an elimination diet based on IgG testing for trigger foods showed favourable results in a medium sized study involving 150 IBS patients (6). It has also been documented that classical inhalant allergies to pollen or dust, for example, often coexist with food sensitivities and an allergy to a specific pollen even correlates with sensitivities to certain foods. Most importantly to us, both IgE and IgG allergies are more common in people suffering from environmental illnesses than in the general population.

Information about allergy testing and where to get it can be found here.