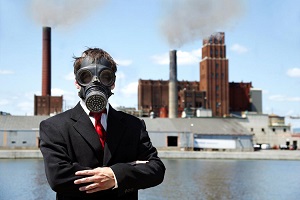 An Overview of Environmental Illness (EI)

Environmental Illness is a term used to describe illness in which environmental triggers play a significant role in producing symptoms, and the illness itself. People suffering from environmental illness may have allergies, be sensitive to certain chemicals, as in multiple chemical sensitivity (MCS) or be unable to work in an office or other enclosed environment without becoming ill, which is known as sick building syndrome.

Some people who suffer from environmental illness become sensitive to almost everything in their environment. They may be allergic to pollen, mold and animal dander, be made sick by a large number of common foods through immediate food allergies and delayed food sensitivities, and be unable to tolerate tiny amounts of everyday chemicals in cleaning and cosmetic products. These people are often referred to as 'universal reactors' because their bodies react to so many environmental triggers.

Environmental illness is sometimes referred to as "universal allergy" or "20th century syndrome". Whichever name is used, universal reactors can suffer symptoms so frequently and/or severely that they must wear carbon filter face masks, or even respirators like the man in our image above, just to stay relatively well.

As yet there is no standard definition for environmental illness, as agreement has yet to be reached about what this should entail. There are many differing opinions within the medical and research communities as to the causes and mechanisms of “EI” and some refuse to acknowledge the existence of anything other than classical allergic reactions.

In the absence of an official definition, environmental illness can loosely be defined as:

“A reaction to common components of a persons environment, including chemicals, food, water and physical particles, that results in symptoms relating to multiple organ systems and a general poor state of health.”

Alternatively, The American Academy of Environmental Medicine puts it this way:

"ENVIRONMENTALLY TRIGGERED ILLNESSES (ETI) are the adverse consequences that result when the homeodynamic interactions among biological functions are compromised by external or internal stressors. These stressors may range from severe acute exposure to a single stressor, to cumulative relatively low-grade exposures to many stressors over time. The resultant dysfunction is dependent on the patient's genetic makeup, his nutrition and health in general, the stressors, the degree of exposure to them, and the effects of seven fundamental biological governing principles: biochemical individuality, individual susceptibility, the total load, the level of adaptation, the bipolarity of responses, the spreading phenomenon, and the switch phenomenon."

Environmental Illness research is in its infancy but hopefully in the near future more solid definitions can be agreed upon and this distressing illness accepted for what it is….a physical illness triggered by factors in a persons environment.

Usage of the Term “Environmental Illness” on this Website

As stated above “Environmental Illness” usually refers to illness or symptoms triggered directly by environmental factors. For the purposes of this website however, the term has been expanded to include all the illnesses which this site addresses, namely chronic fatigue syndrome, fibromyalgia, candida related illness, irritable bowel syndrome, leaky gut syndrome, gulf war syndrome and autism.

The reason we have chosen to do this is because all these illnesses are now increasingly acknowledged as being closely related or even slightly different manifestations of the same underlying physiological processes. There is a large body of research showing that people suffering with these illnesses are much more likely to also suffer from chemical sensitivities and allergies of different kinds, than healthy individuals or those with other diseases. In light of this a number of terms have been proposed to encompass all of these apparently intimately linked syndromes. A few examples of these are:


The term “Functional Somatic Syndrome” includes syndromes not generally associated with those included on this website, such as PMS and Non-cardiac Chest Pain. It’s a term applied to any illness/syndrome where there is an “absence of proven pathophysiological mechanisms” for multiple somatic symptoms.

“Neurosomatic” is a term coined by Dr. J. Goldstein which he applies specifically to the illnesses we are dealing with here. He believes that these illnesses are the result of disturbances in brain function involving the stress response amongst other factors.

"Chronic Neuroimmune Disorders" is a name quite widely used by different people. It does a good job of accurately describing these illnesses in that they are all chronic and involve abnormalities of both the nervous and immune systems. The term 'neuroimmune' also points to the emerging truth that these two systems do not function seperately from each other, what affects one affects the other as well. For example receptors in the brain can be activated by immune chemicals and the immune system can be affected by levels of certain brain chemicals.

Needless to say, none of these terms has been widely accepted. So in the absence of a common term for all the illnesses referred to, we have decided to include them under the heading of “Environmental Illness”, mainly because it is already widely associated with these illnesses, or components of them, and also because we feel it is accurate in that all of these illnesses have a major environmental component that triggers and/or sustains them.