Browse our library of news below or learn more about allergy symptoms, diagnosis and causes.

This spring threatens to deliver a particularly nasty allergy season, and those who suffer from hay fever (seasonal rhinitis) need to be prepared, experts are warning. Indeed, as well as being worse than usual, pollen allergy symptoms are affecting people much earlier this year.

According to a press release Dr. Jordan Josephson, a sinus specialist at Lenox Hill Hospital in New York "with the crazy up and down weather, some parts of the country [US] could see worse allergy-provoking conditions. There is likely to be a 'pollen superburst' this season, so sufferers should get ready. It promises to be a nasty spring," he added.

It's crucial to deal with allergy symptoms immediately, according to Josephson.

​Researchers have uncovered 16 new genetic associations related to respiratory allergies caused by common allergens like pollen, dust-mites and cat dander. The findings come from the largest ever genome-wide meta-analysis of existing studies.

The symptoms of hay fever and other respiratory allergies plague a large proportion of the population in developed nations. As much as 20% of American children may experience allergic reactions to one or more allergens such as those mentioned above; the figure is slightly lower for adults but still significant. Genes implicated in the study highlight a series of key pathways in the biological basis of common allergies.

The study, conducted in collaboration between 23andMe, the leading personal genetics company, and the Avon Longitudinal Study of Parents and Children (ALSPAC), examined data for more than 53,000 individuals. The study also identified eight genetic variations for allergies that have previously been associated with asthma.

Spring is a time of misery for many children as grass pollen counts - the most common trigger for hay fever - rise and symptoms become ever more frequent and severe. According to a recent study, American kids are more likely to be affected than those born outside the US.

The findings, which may surprise many, do not just apply to pollen allergy but also asthma and allergies to other allergens including animal dander, dust and even foods. Current official figures show that roughly 11% of children living in the US suffer from asthma, and up to 20% may experience allergic reactions to one or more allergens such as those mentioned above.

With the high prevalence of atopic diseases (e.g. asthma & hay fever) among American kids in mind, scientists decided to investigate whether different environmental exposures, dictated by where children were born, could affect the risk of allergic disease. The investigators studied 91,642 kids between the ages of 0 to 17 years, all current US residents, who participated in the 2007–08 National Survey of Children’s Health.

In the United States at least 2012 has been unseasonably warm and pollen seasons have been extended - leading many to label it the worst year on record for allergies. New research however predicts a result of climate change will lead to pollen counts doubling by 2040 with allergies becoming an even bigger issue.

The startling findings were presented by allergist Leonard Bielory, M.D., at the Annual Scientific Meeting of the American College of Allergy, Asthma and Immunology (ACAAI) that ran November 8-13.

"Climate changes will increase pollen production considerably in the near future in different parts of the country," said Dr. Bielory, ACAAI board member and fellow. "Economic growth, global environment sustainability, temperature and human-induced changes, such as increased levels of carbon dioxide, are all responsible for the influx that will continue to be seen." 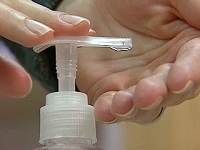 New research funded by the US National Institutes of Health (NIH) suggests level of exposure to antibacterial ingredients in personal hygiene products correlates with a child's risk for respiratory and food allergies.

Scientists from Johns Hopkins Children's Center used data from a US national health survey of 860 children, aged 6 to 18, to examine the association between urinary levels of antibacterials and preservatives found in soap, toothpaste, mouthwash and other personal care products and the presence of IgE antibodies in the children’s blood.

The presence of IgE antibodies to specific substances such as pollens or foods are a sign that an individual may be allergic to these substances, or at increased risk for subsequently developing such an allergy. Previous research, notably a study conducted by researchers at the University of Michigan School of Public Health, has shown that widespread use of antibacterial agents such as triclosan and added to personal care products to kill germs may be leading to an increase in allergies in kids; a finding the scientists said supports the Hygiene Hypothesis.