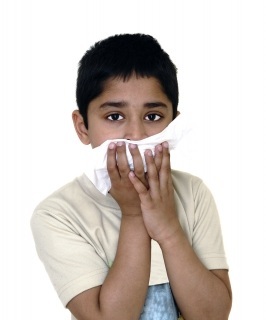 Spring is a time of misery for many children as grass pollen counts - the most common trigger for hay fever - rise and symptoms become ever more frequent and severe. According to a recent study, American kids are more likely to be affected than those born outside the US.

The findings, which may surprise many, do not just apply to pollen allergy but also asthma and allergies to other allergens including animal dander, dust and even foods. Current official figures show that roughly 11% of children living in the US suffer from asthma, and up to 20% may experience allergic reactions to one or more allergens such as those mentioned above.

With the high prevalence of atopic diseases (e.g. asthma & hay fever) among American kids in mind, scientists decided to investigate whether different environmental exposures, dictated by where children were born, could affect the risk of allergic disease. The investigators studied 91,642 kids between the ages of 0 to 17 years, all current US residents, who participated in the 2007–08 National Survey of Children’s Health.

For each child enrolled in the study, the children or their parents - depending on the child's age - answered questions relating to their place of birth, whether in the US or outside of the country, and how long they had lived in the U.S. The researchers also collected medical information about the children’s atopic diseases, including asthma, eczema, hay fever and food allergies.

Once this data was collected and organized the scientists set about their analysis. What they found was surprising. When comparing place of birth with atopic-disease prevalence, it was found that children born outside of the US were less likely to develop asthma or allergies compared with those born in the US.

The data showed that just 20% of foreign-born youngsters developed allergies compared with 34% of American-born children. The prevalence of asthma was even lower, with those born outside of the country 47% less likely to develop the condition than those born in the US.

The research team made sure to account for other factors that are known to affect allergy rates, such as race or ethnicity and socioeconomic status; even after doing so the strong association between being born in the US and the higher risk of atopic diseases remained.

Intriguingly, it was also found that the longer foreign-born children had spent in the US, the greater their risk of developing asthma or allergies became. A clear indication that factors in the US environment, or perhaps way of life, tends to increase the prevalence of these hyperactive immune-reactions.

According to the study authors the so-called "hygience hypothesis" is a prime candidate to explain the results. “The hygiene hypothesis suggests that early-life exposures to infection or an unclean environment may protect against allergies. Children born and raised outside the US likely have more and/or different infectious exposures than those born in the US,” says study author Dr. Jonathan Silverberg of St. Luke’s–Roosevelt Hospital Center in New York City. “That American cities are ‘too clean’ may be overstated. However, previous studies suggest that rolling in the dirt from time to time may be a good thing for kids.”

The authors also suggest factors including parental behaviors and cultural practices, as well as native diet, may also play a role. “Parents born and raised outside the United States may, for example, follow a healthier diet or have foods with a different antigenic profile than typically encountered in the Western diet,” the authors write. “Some cultures more commonly use spices, such as curcumin, and green tea that have antiallergy and inflammatory properties.”

Although this study wasn't designed to identify specific aspects of US life result in the increased prevalence of atopic disease in kids, the results do quite literally provide food for thought.

Maff
My wife and I separated when our daughter was 12-18 months. She is now 3 years old and the happiest ...
The Mental Health Effects For Children Of Div...
about 3 months ago

Gacess99
The child life is very simple and innocent and divorce is effect on child's life as emotion and ment...
The Mental Health Effects For Children Of Div...
about 3 months ago

Stone
I believe that divorce rate increases have also been caused by simplification of divorce filing proc...
The Mental Health Effects For Children Of Div...
about 9 months ago

Guest - Nicci Skincare
Thank you so much for these insights, you're gonna change so many lives!
5 Ways to Help Treat the Most Common Addictio...
about 9 months ago

Guest - James
This was a really great article on hazardous waste management. It was very informative and gave grea...
Hazardous Waste Management
about 9 months ago