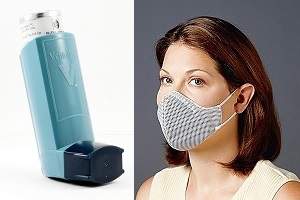 A new study looking at the prevalence of both asthma and chemical hypersensitivity in the United States has found a significant overlap between the two conditions.

The study published in the journal Toxicology and Industrial Health interviewed people from across the US to determine the national prevalence of asthma and chemical hypersensitivity and uncover any links between the two conditions.

The researchers from the Environmental Studies department at the University of West Georgia gathered data from a random sample of 1058 people from across the continental US. The sample was weighted so that roughly equal numbers of people from different states were included in the study.

Among the asthmatic participants 38% reported irritation from scented products such as perfumes, personal care products and laundry detergents, while 37.2% reported health problems from air fresheners. A toxic exposure was reported as being the initial trigger of participants' asthma in 13.6% of those with the respiratory condition.

Finally, the study revealed that asthma cases affected different racial/ethic groups in roughly the same proportion. Asthma can be classified as either childhood onset or adult onset and this study found nearly 50% of asthmatic participants first developed asthma during childhood.

The study provides further evidence that there is an association between asthma and chemical hypersensitivity, or multiple chemical sensitivity (MCS). Clearly MCS is more prevalent in those with asthma than it is in the general population with 31.4% being affected. Although the prevalence of MCS and the medical diagnosis of the condition have not yet been definitively established, a number of regional US epidemiologic studies have investigated the percentage of the population affected. The numbers reported by these studies, including those conducted by the California Department of Health Services and corresponding agencies in Georgia and New Mexico, all fall about the 15% mark. The National Academy of Sciences also estimates 15% of the US population suffer from MCS. So at 31.4% of asthmatics in this latest study reporting MCS, this is more than double the figure for the general population.

One reason for the increased incidence of MCS among asthmatics is likely to be the fact that both conditions are often triggered by acute or chronic toxic exposures. A subset of adult onset asthma, occupational asthma, refers to such instances. Previous research has found that it is this group that most often also report suffering from MCS. The etiology of MCS have yet to be explained but research has hinted that toxic insult to the nervous, endocrine, and immune systems in particular may cause subsequent hypersensitivity to a wide range of chemicals.

What is clear is that patients and health care providers need to be aware of the association. A previous study by the same researchers found that while 27.2% of asthmatics reported being hypersensitive to chemicals, only 7.4% had been diagnosed with MCS The researchers suggest this is most likely the result of doctors' ignorance of MCS.