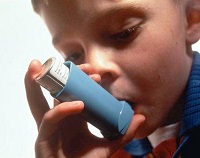 The latest epidemiological research suggests exposure to even very small amounts of certain pollen types can trigger symptoms in children who suffer from asthma.

Asthma affects more than 300 million people worldwide and its prevalence is increasing on average by 50 per cent every decade. It currently affects 1 in 10 children in developed nations and is the third raking cause of hospitalization among children under the age of 15 years.

Asthma is an atopic condition meaning that it shares a biological relationship with the allergic conditions hay fever and eczema/allergic dermatitis. These conditions are frequently "co-morbid" - meaning an individual who suffers from one is more likely to suffer from another. Also, a parent with an atopic condition is more likely to have a child who develops any for of atopic illness. The present study looked at the effects of ambient pollen exposure on asthma symptoms in all asthmatic children, whether they also had allergies to pollen or not.

Scientists from the School of Forestry and Environmental Studies, Yale University, looked at 430 children with asthma (age 4-12 years) in Connecticut, Massachusetts, and in New York.

The children and their parents were asked to record daily symptoms of wheeze, night symptoms, shortness of breath, chest tightness, persistent cough. The use of rescue medication was also recoreded.

Meanwhile the researchers estimated the daily ambient exposures of the children to tree, grass, weed, and total pollen using a variety of data sources.

Seperate analyses were carried out for kids who used asthma maintenance medication and those who had diagnosed allergies to any type of pollen measured in the study.

The results showed that in children sensitized to specific pollens there was a strong association between exposure to these pollens and the presence of asthma symptoms.

The frequency and severity of symptoms experienced in the children was mediated by the use of asthma maintenance medication.

The researchers conclude in the journal Epidemiology that: "Even low-level pollen exposure was associated with daily asthmatic symptoms [in children 4-12 years]."

The results of this study highlight that children who suffer from asthma and allergies need to be particularly careful to avoid asthma attacks and potential hospitalization. The use of asthma maintenance medication appears to be helpful. Measures to reduce pollen exposure in the home (e.g. keeping windows shut during pollen seasons, regular use of HEPA filter air purifiers and vacuums) and dietary measures (e.g. eating foods high in essential fatty acids, vitamin A and zinc) may also be of benefit.