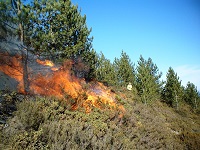 As climate change continues many countries will have to deal with more frequent and severe wildfires, but one result of this not often discussed is risk to those with asthma and allergies.

As we enter the final month of summer in the northern hemisphere wildfires have been raging in a number of countries where hot and dry conditions prevail.

Throughtout the month of August ferocious wildfires ravaged the surrounding areas of Greece's capital, Athens. According to the European Commission the fires destroyed approximately 21,000 hectares of pines, olive grove, brush and farmland. Thousands of residents had to abandon their homes to escape the smoke and flames.

Now wildfires are once again ravaging areas just north of Los Angeles, California, in the United States. Over the weekend Governer Arnold Schwarzenegger proclaimed a state of emergency with temperatures of 38C (100F) and low humidity combining to create the "perfect storm".

Back in February at the height of the Australian summer Australia that country also witnessed huge wildfires. The number of affected areas and casualties both set record highs for the nation.

Such fires obviously cause huge environmental, economic, and personal loss, but they also pose a significant threat to those who suffer from asthma and allergies.

Although asthma is often considered a minor health concern, studies show that those suffering from the condition have a greatly increased rick of all cause mortality compared to healthy individuals, primarily due to asthma attacks and their complications.

Asthma is a chronic respiratory condition resulting in breathing difficulties caused by inflammation and narrowing of the major airways (the bronchi) in the lungs. The primary symptoms are shortness of breath, tightness in the chest, coughing, and wheezing. It is estimated to affect 300 million people worldwide (learn more about asthma).

The inflammatory process at the root of asthma can be triggered by a variety of factors and wildfires produce many of these. The smoke itself is an irritant to the respiratory tract and the fires also throw up other triggers including allergens such as pollen from trees, grasses, ragweed, and other plants. Of course these allergens also increase the suffering of allergy sufferers in wildfire areas who are more likely to suffer symptoms of rhinitis such as sneezing, itching mouth, nose, and eyes, and nasal congestion. Sinusitis is another condition that may have an allergic origin and be exacerbated by the fires.

It is not just those asthma and allergy sufferers in the immediate vicinity of wildfires that need to be vigilant either; the smoke and allergens it carries can travel for many hundreds of miles with the prevailing wind. A thick haze extends from Colorado through western Kansas and into Oklahoma and Texas as a result of the California wildfires.

Those with asthma and allergies in regions where wildfires are present, or where the resulting smoke reaches, therefore need to take precautions. Staying indoors with the windows securely shut as much as possible until the air quality improves is advisable, while having asthma inhalers and modern non-drowsy antihistmine medications such as those containing Loratadine to hand, is also important.

There are also a number of natural alternatives to antihistamine medications for those who suffer from respiratory allergies. Take a look at our Natural Allergy Treatment page for more information.

In a world where wildfires are predicted to become more frequent being prepared and knowing your options will only become more important.