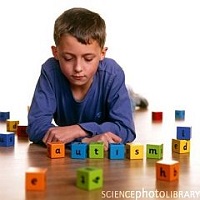 For the past couple of decades rates of autism seem to have risen dramatically but now a US Environmental Protection Agency (EPA) has pin-pointed a sudden jump in cases since 1988 and suspects yet to be identified environmental triggers are a likely explanation.

By reviewing extensive worldwide data EPA scientists were able to see that rather than a steady increase in the incidence of autism over a number of decades there was in fact a distinct "changepoint" in the 1988-1989 birth cohort - a sudden and substantial spike in autism rates.

Michael E. McDonald and John F. Paul, of the EPA's National Health and Environmental Effects Research Laboratory looked at specific Californian, Danish and worldwide datasets and found the same changepoint for autism incidence across all three. Acording to the researchers the rate of increase in new cases of autism before 1988 "was significantly different" than the rate after that year. In California, the rate spiked from 5.7-per-10,000 before the changepoint, to 20.8-per 10,000 after, while the worldwide dataset showed a similar jump - from 6.0 to 24.2. In Denmark, where autism had been extremely rare the rise was even more dramatic, going from 0.6 to 6.6 - total incidence remaining a fraction of that for California and worldwide however.

In recent years there has been increasing debate about whether the rise in autism diagnoses is down to a genuine increase in the number of children affected by the developmental disorder or is a result of greater awareness among parents and doctors and changing diagnostic criteria. The author's of the EPA study say: "Although the debate about the nature of increasing autism continues the potential for this increase to be real and involve exogenous (external) environmental stressors exists."

McDonald and Paul doubt that greater awareness and evolving diagnostic criteria are enough to explain the magnitude of the rise alone. They cite a recent study suggesting that changing diagnostic criteria may account for only a "2.2-fold higher cumulative incidence of autism, relative to the seven-fold increase" reported in California over 11 years. Likewise, they said, "diagnostic substitution," or switching kids from the mental retardation to autism category, "could not account for increased autism rates during the period from 1987 to 1994."

Whilst not providing a list of specific chemicals, toxins or other environmental factors that might account for the rise in autism cases the tone of their paper firmly points to these as potential explanations. They do however rule out involvement of MMR or thimerosal (mercury) in vaccines based on currently available epidemiological studies.

Many parents and advocacy groups are convinced that MMR and/or thimerosal are directly linked to children developing autism and the debate over this being the case is likely to continue for some time. However, the are many other potential environmental factors that may underlie the substantial rise in autism incidence, some of which include pesticides, endocrine-disrupting chemicals, mercury in fish (primarily consumed by mother's during pregnancy), viruses, intestinal yeast (Candida) overgrowth, dietary opioid-like peptides from gluten (wheat and other grains) and casein (dairy products), air pollution and any number of vaccine-related explanations including associations with mitochondrial dysfunction/disease, overstimulation of the immune response, and the involvement of fragments of genetic material derived from human cellular material used to manufacture certain vaccines.

The EPA researchers urge a precautionary approach, since the way they see it, prudence suggests we should assume at least some of the increase in incidence of autism is real and results from environmental factors interacting with genetic susceptibilities in certain children. Given this, exposure is potentially preventable and identification of relevant candidate environmental factors should be a research priority, they write.

Although the potential environmental triggers are potentially endless the fact that this study shows a clear changepoint in incidence means that researchers can now narrow down their search and focus on those things in a child's environment that increases from around 1988 into the 1990s.

McDonald and Paul write "Future studies should examine for novel or increasing exposures to environmental factors from gestation to at least age three for our calculated 1988-1989 birth cohorts. Assuming a dose-response relationship, a candidate factor would have continued to increase in the environment from the late 1980s through at least the mid-1990s."

This could very well be a significant moment in the search for the elusive cause(s) of autism.