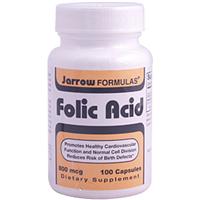 A new study has found that a genetic variation in themethylenetetrahydrofolate reductase (MTHFR)enzyme vital for the metabolism of folate, the form of folic acid found in the body, is much more common in children with autism than their neurotypical peers.

There has been a large amount of interest in a link between folic acid and autism in recent years. Some studies have shown that mothers who take folic acid supplements during pregnancy to prevent nueral tube defects, such as spina bifida, are more likely to have autistic children. The reasons why this may be the case are still unclear but may involve effects of large amounts of folic acid on the developing foetal brain or changes in MTHFR gene expression that mean folate deficiency is more likely during childhood.

It is a complicated issue since this current study and others before it indicate that autistic children have a genetic variation which means that they do not efficiently convert folate into various important biochemicals involved in such processes as neurotransmitter metabolism and detoxification - both areas where abnormalities have been found in autism. These results then suggest autistic children may benefit from additional folic acid, or perhaps a more bioactive form, to overcome the reduced activity of the MTHFR gene. This is something many parents and doctors associated with the Defeat Autism Now! (DAN!) approach are actively pursuing but the authors of this new study are cautious about recommending such measures.

The results of the study were presented recently by Daniel Schulteis, MD, from the Nationwide Children's Hospital in Columbus, Ohio, USA, at the Pediatric Academic Societies and Asian Society for Pediatric Research 2011 Annual Meeting. For a long time it was though that autism had a purely genetic basis but it is now widely accepted that the disorder results from an interplay between genetic susceptibility and environmental triggering factors such as exposures to toxic chemicals like pesticides. So far however, no theory has been able to tie everything together.

Dr. Schulteis noted that there was significant anecdotal evidence from parents and DAN! doctors that use of folic acid supplements could lead to improvements in the symptoms of autism spectrum disorders (ASDs) but that there was a lack of quality evidence to support such an intervention at present and it was therefore not medically endorsed.

Previous research had also suggested that single nucleotide polymorphisms (SNPs), small variations in gene structure that can have large effects on the functions of enzymes the gene encodes for, were an important piece in the puzzle of ASDs. MTHFR SNPs were found to be much more prevalent in those with autism so Schulteis and colleagues decided back in 2002 to look into the association in detail. To that end they established the MTHFR Registry to accumulate data. The database contains information on patients who have been screened for the common C677T and A1298C MTHFR polymorphisms in connection with other medical concerns.

The scientists analysed  the data contained in the registry from 487 patients younger than 26 years of age and found  that 246 (51%) had at least 1 of the 2 mutations. The C677T mutation was the more common of the two, affecting 67% of the patients. The data revealed fourteen of these 246 individuals had an ASD, a figure which is significantly greater than the accepted Centers for Disease Control and Prevention (CDC) prevalence rate which stands at roughly 1 case in 110 in young people. The figure for those with a MTHFR SNP in the study works out at approximately 1 case in 18 by comparison . The CDC's prevalence figures for ASDs was confirmed in the study as the rate in control subjects who did not have a MTHFR SNP was 1 in 110.

The researchers concluded that the data indicates the prevalence of ASDs in those with MTHFR SNPs is 1.7 times greater than for those with the normal versions of the MTHFR genes. Additionally it was a mutation in the C677T gene that appeared to impart the greatest risk.

Dr. Schulteis is quoted as saying "Our results add credence to the folate hypothesis, at least in this select number of ASD cases. These data should not be taken as a recommendation for change regarding folate supplementation, but are an indication of the need for further prospective studies".