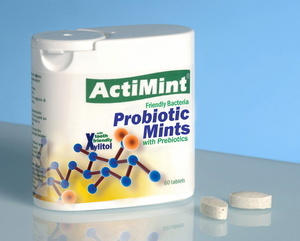 Probiotics, which means for life, have been used for centuries as natural components in health-promoting foods. Many experiments and studies have linked probiotics to aiding a range of ailments, such as lactose intolerance, colon cancer, lowering of cholesterol and blood pressure and, most importantly, improving immune function.

A study just published by scientists at Londons Imperial College, published in Molecular Systems Biology, adds more weight to the argument for probiotic bacteria, demonstrating the measurable affect they have on gut flora. It revealed that when probiotics are consumed, the bile acids that break down fat in the gut are affected, possibly helping them to work more effectively. In theory, this could mean more fat passing undigested through the body  rather than being absorbed, although the study does not prove this.

Professor Jeremy Nicholson, who led the project, said "Our study shows that probiotics can have an affect and they interact with local ecology and talk to other bacteria. We're still trying to understand what the changes they bring about might mean, in terms of overall health, but we have established that introducing 'friendly' bacteria can change the dynamics of the whole population of microbes in the gut."

"The gut naturally contains these beneficial bacteria which keep levels of disease-causing bacteria under control, but they are increasingly compromised by chemically-laden, over-processed foods, drink and medicines we ingest and the poilluted air we breathe. Supporting and boosting these good bacteria helps to restore optimum levels, aiding the immune system to detoxify the body and maintain a healthy digestive system, as well as providing a useful boost of sustained energy and even physical benefits. Anecdotal evidence ranges from improved eye sight to thicker, shinier hair."

Probiotics are live microbes which provide fundamental health benefits. Lactobacillus acidophilus is one of the most important strains of bacterial culture and forms an important part of our digestive process. 150 billion microencapsulated live cells (colony forming units) per gram go into ActiMint Tablets; all the benefits of a pot of yoghurt or a probiotic drink in just two easy-to-take, convenient to carry capsules.

Professor Glenn Gibson, School of Biosciences at Reading University says "ActiMint is eminently suitable to take as a probiotic addition on a regular basis."

He recommends taking probiotics before, during and after a course of antibiotics and says "Nobody could overdose on ActiMint because probiotics can only contribute to gut and oral health."

The symbiotic advantage of ActiMint is due to the balanced combination of probiotics and prebiotics. Scientists agree that probiotics taken regularly aid digestion, regulate elimination and clear breath odour.

Two tablets taken after each meal will help to maintain an optimum probiotic level. RRP is £2.99 for a single container of 60 capsules. For more information visit actimint.com.