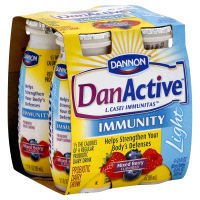 ​A new US study has found that the yoghurt drink DanActive which contains the probiotic bacteri Lactobacillus casei reduces the rate of common infections in children of daycare centre age.

The results support those of similar studies conducted on probiotic drinks in Europe but the design of this study was aimed at replicating real-life consumption and daily living of the children involved rather than the more laboratory-based studies that had gone before.

The probiotic yoghurt drink DanActive reduced the rate of common sicknesses such as ear infections, sinusitis, the flu and diarrhea in daycare children, say the researchers led by Daniel Merenstein of Georgetown University School of Medicine (GUSOM) who studied the drink in the largest known probiotic clinical trial to be conducted in the United States. An additional finding, however, showed no reduction in the number of missed school days. The study is published online in the European Journal of Clinical Nutrition.

Probiotic foods are continuing to increase in popularity and some are marketed for the potential benefits of probiotics such as Lactobacillus casei (L. casei) DN-114 001, the probiotic in DanActive. Studies in other countries have found that probiotics, which are live micro-organisms, produce positive health benefits in children, including the reduction of school days missed due to infections. However, most of the research was conducted outside the United States in structured conditions not comparable to normal everyday living.

"We were interested in a study that resembled how children in the U.S. consume drinks that are stored in home refrigerators and consumed without study personnel observation," says the study's lead author Daniel Merenstein, MD, director of research in the Department of Family Medicine at GUSOM.

"To our knowledge this is the largest probiotic clinical trial conducted in the U.S. and provides much needed data," say the authors of the study. "We studied a functional food, not a medicinal product; parents will thus feed their children without any physician input and we felt it was best to assess [the drink] under similar conditions."

The study, titled DRINK (Decreasing the Rates of Illness in Kids), was a randomized, double-blind, placebo-controlled study; the gold standard in clinical research design. It included 638 healthy children, aged three to six, who attended school five days a week. Parents were asked to give their child a daily strawberry yoghurt drink. Some of the drinks were supplemented with the probiotic strain L. casei DN-114 001 (DanActive), while others had no probiotics (placebo). Neither the study coordinators, the children, nor the parents knew which drink was given to which participant until the study ended. In addition to phone interviews with researchers, parents kept daily diaries of their child's health and the number of drinks consumed.

Researchers found a 19% decrease of common infections among the children who drank the yoghurt drink with L. casei DN-114 001 compared to those whose drink did not have the probiotic. More specifically, those who drank DanActive had 24 percent fewer gastrointestinal infections (such as diarrhea, nausea, and vomiting), and 18 percent fewer upper respiratory tract infections (such as ear infections, sinusitis and strep). However, the reduction in infections did not result in fewer missed school days or activities, also a primary outcome of the study.

"Our study had mixed results," says Merenstein. "Children in school or daycare are especially susceptible to these illnesses. We did find some differences in infection rates but this did not translate to fewer missed school days or change in daily activity. It is my hope that safe and tolerable ways to reduce illnesses could eventually result in fewer missed school days which means fewer work days missed by parents."

"It is important that more of these products are put under the microscope by independent academic researchers," he concludes.

Merenstein's feelings are likely to be mirrored by other scientists studying the effects of probiotic products, especially after the European advertising watchdog pulled up probiotic companies recently for making unsubstantiated health claims about their products. Still research so far is promising and it is likely probiotic products have a role to play in maitaining optimum health from an early age.