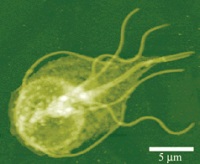 A new study from Norway suggests that infection with the gut parasite Giardia lamblia is associated with a significantly increased risk of developing chronic fatigue syndrome.

Giardia lamblia is a parasitic microorganism which can be transmitted via water contaminated with infected human, animal or bird faeces, as well as by consuming contaminated food or contact with contaminated surfaces. The parasite causes intestinal infection known as Giardiasis which is common worldwide. Giardiasis, or Giardia enteritis, usually lasts a few weeks, but in some individuals may enter a prolonged phase.

Researchers focused on a population in Bergen, Norway, that had been hit by an outbreak of Giardia enteritis in 2004 after contamination of the municipal water supply. The outbreak involved a total of 1,262 people (764 female and 498 male) with the infection confirmed by laboratory testing. The scientists noted what appeared to be a much higher than average incidence of chronic fatigue syndrome (CFS) among the victims of the Giardiasis outbreak so decided to investigate further.

Two years after the outbreak in 2006 the entire affected population was sent questionnaires by the scientists designed to assess general health, with a particular focus on fatigue. Of the 1,262 confirmed cases, 1017 (81%) replied to the questionnaires and the investigators found that fatigue was reported as a frequent symptom by 41% of respondents which compares to a figure of 22% for the general population.

Patients with loss of employment or interupted education due to suffering severe fatigue were admitted to a specialist chronic fatigue clinic at the Department of Neurology, Haukeland University Hospital, Bergen, for clinical evaluation with Centers for Disease Control and Prevention (CDC) criteria.

A total of 96 patients were referred to the chronic fatigue clinic and after careful history taking and the exclusion of other possible diagnoses it was found that 58 of those met the CDC criteria for CFS.

This figure represents a roughly 5% rate of CFS in the victims of the Giardiasis outbreak which is more than eight times the established rate in the general population, according to the Norwegian research team.

The scientists were also interested in the onset of the CFS and of the ongoing nature of the fatigue, as well as the degree of disability and the level of work related impairment and loss of employment suffered by the patients. Data was gathered from medical records, patient statements and a range of structured and recognised health questionnaires and scales.

At the time of the study the average duration of illness in the patients was 2.7 years. Of the 58 diagnosed with CFS 16% reported improvement, 28% reported no change, and 57% reported a gradual worsening of their condition over the course of their illness. Patients who had a symptom-free gap between Giardia enteritis symptoms and development of CFS-like symptoms were excluded from the study.

A distinctive pattern of illness was always discovered during the study. On one scale in particular (SF-36), physical functioning, vitality (energy/fatigue) and social functioning were especially reduced. Long-term sickness absence from studies and work was common to all patients.

The researchers state that to their knowledge: "this is the first report of CFS after a large community outbreak of confirmed Giardia enteritis."

The results support the increasingly accepted reality that the illness once referred to as 'post-viral fatigue syndrome' and most commonly known as chronic fatigue syndrome, can in fact be initiated by other infectious agents including gut parasites like Giardia lamblia.

It is also interesting to note the similarity of symptoms between all 58 patients in this population with particularly severe fatigue and loss of physical and social functioning, as well as the fact the CFS was of a severity that led all patients to take long-term absence from work or education.