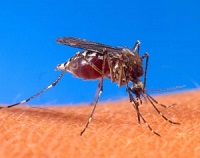 ​New research finds that DEET, one of the world's most common insect repellents affects the human nervous system in the same way as pesticides and nerve gas.

DEET was developed by scientists working for the US Department of Agriculture and has been in widespread use in insect repellent products for agricultural, commercial, and personal use for more than 50 years.

Surprisingly there has been very little research on human safety and how it interacts with human biology until recently. Now, Vincent Corbel and colleagues at the Institute for Development Research in Montpellier, France, have found that DEET is likely to cause neurological dysfunction due to a particular mechanism of action.

The results of the study were published yesterday in the open access journal BMC Biology.

According to the researchers DEET, or N,N-Diethyl-3-methylbenzamide to give it its full chemical name, is used by about 200 million people every year and over 8 billion doses have so far been applied over its 50 year lifespan. They note that there is widespread and increased interest in the use of the chemical in public health programs but that caution and more research is needed to determine its mechanisms of action and toxicological profile in insects, mammals, and humans.

Even after more than 50 years scientists still don't know exactly how the DEET works, even on the blood-seeking insects it is used to against; an example of industry and government focus on profits with the attitude that if it works for its intended purpose then why bother running expensive safety studies. It is variously suggested that it blocks the sensory neurons that would be stimulated by a potential meal or that bugs are simply put off by the smell.

With the lack of data on the compound's mechanism of action and toxicity in mind, the present study was conducted. Corbel's team, along with a team of researchers led by Bruno Lapied of the University of Angers, investigated how DEET affects levels of acetylcholine (ACh), and acetylcholinesterase (AChE), the enzyme responsible for breaking it down when it has served its function. They also looked at the consequences of its interactions with carbamate insecticides which are strong inhibitors of AChE.

ACh is used by the peripheral nervous system (PNS) to activate muscles and for many functions in the autonomic nervous system (ANS), and is also the most abundant neurotransmitter in the central nervous system (CNS) where it is involved in memory, arousal, and reward. Inhibition of acetylcholinesterase has been strongly implicated in the pathogenesis and disease processes of Gulf War syndrome.

The researchers found using toxicological, biochemical and electrophysiological techniques, that "DEET is not simply a behavior-modifying chemical [in the way it repels insects] but that it also inhibits cholinesterase activity, in both insect and mammalian neuronal preparations."

The result is a toxic build-up of ACh that ultimately prevents the transmission of signals across the neuron synapse, which may result in symptoms such as muscle weakness and spasm, memory deficits, and other cognitive difficulties.

DEET is by no means as potent a acetylcholinesterase-inhibitor as insecticides or nerve gases but the researchers note that it is commonly used with carbamate insecticides so the effects could be additive or synergistic.

These findings are important for the study of Gulf War syndrome as one of the primary mechanisms proposed to account for the complex mix of neurological symptoms reported by tens of thousands of veterans of the first Gulf War is the blockade of AChE. Troops were exposed to a wide range of chemicals known to be AChE-inhibitors including insecticides, nerve gas such as sarin, pyridostigmine bromide (PB), an anti-nerve gas drug, and DEET itself which was used widely on tents, vehicles and clothing.

Just a few months ago The Environmental Illness Resource reported on a study of Gulf War veterans with Gulf War syndrome which found three distinct subsets of the syndrome associated with which chemicals the veterans were exposed to (although all were AChE-inhibitors). (read more)

A US government report released late last year entitled "Gulf War Illness and the Health of Gulf War Veterans," concluded that "Many of the pesticides used in the Gulf War, as well as PB and nerve agents, exert toxic effects on the brain and nervous system by altering levels of ACh."

The report acknowledged that DEET could be toxic to the nervous system based on earlier research but failed to consider its additive effects when combined with other AChE-inhibitors.

Corbel told the AFP news agency that "For US soldiers, the cocktail of high doses of PB and insect repellents to protect against mosquito bites may have caused symptoms, as both act on the central nervous system in the same way."