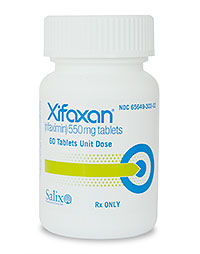 ​A study reviewing clinical trials of common pharmaceuticals used to treat irritable bowel syndrome (IBS) has found that the gut-specific antibiotic drug rifaximin was associated with far fewer side-effects than other alternatives.

Researchers at Cedars-Sinai Medical Center in Los Angeles, analysed the results of 26 large-scale clinical trials and found that rifaximin was by far the safest treatment when compared to other drugs including tricyclic antidepressants and alosetron, all typically used in the treatment of diarrhoea-predominant IBS (IBS-D).

The study, whose results are to be presented at the American College of Gastroenterology annual meeting in Washington, D.C., was led by Dr. Mark Pimentel, MD, director of the G.I. Motility Program at Cedars-Sinai Medical Center and investigated drug interventions deemed to have previously shown their effectiveness in treating IBS.

Rifaximin is a non-absorbable antibiotic drug - meaning its effects are limited to bacteria that inhabit the gastrointestinal (GI) tract. The rationale behind its use in IBS is that the condition (particularly IBS-D) is caused, at least in part, by an overgrowth of bacteria in the small intestine - referred to as small intestinal bacterial overgrowth, or SIBO. The upper GI tract should be comparatively sterile compared to the colon which plays host to a thriving ecosystem of microbes.

Relatively recently the idea that bacteria were involved in causing IBS would have been dismissed by the vast majority of gastroenterologists but a significant body of research now exists demonstrating this reaility. A study conducted in India and published earlier this year in the Journal of Gastroenterology and Hepatology found SIBO to be significantly more common in IBS patients than in control subjects, while a US/Dutch study published in Gastroenterology found the presence of specific gut bacterial strains to be associated with IBS in children. Dr. Pimental and colleagues at Cedars-Sinai have previously shown through two double-blind trials that patients who suffered from IBS-D reported relief from bloating, less abdominal pain and improved stool consistency for up to 10 weeks when treated with rifaximin.

Dr. Pimental said: "Unfortunately, many of the treatments approved for IBS cause intolerable complications for many patients. This underscores the need for us to continue to seek new therapies for this disease, which dramatically harms quality of life for millions of people."

The study also found that for every 2.3 and 2.6 patients who benefitted from tricyclic inhibitors and alosetron respectively, one patient was harmed by the study medication and had to withdraw. For rifaximin, this number was 897.

"This further validates previous research we've done on rifaximin as a safe and effective treatment for IBS," Pimentel said. "Now, not only have our previous clinical studies shown that this selectively absorbed antibiotic is the first treatment for IBS patients in which patients continue to have relief from their symptoms after stopping the drug – compared to other available treatments for the condition, it statistically has caused fewer adverse side effects."

N.B. It must be noted that both Cedars-Sinai Medical Center and Dr. Pimental have ties to Salix Pharmaceuticals Inc., the company that markets rifaximin.