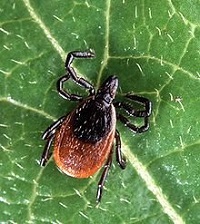 A new study shows that the bacteria responsible for Lyme disease takes cover in lymph nodes to evade immune cells. Meanwhile, the US state of New Hampshire has passed a law allowing doctors to treat chronic Lyme disease with long-term antibiotic therapy.

Lyme disease is an infectious disease caused by a spirochete (spiral shaped bacterium) known as Borrelia burgdorferi and most commonly spread by ticks. The most obvious sign of infection is a chracteristic rash around a tick bit known as Erythema migrans, or a "bullseye" rash, so named because it is circular and red around the outside with a pale centre. Symptoms of Lyme disease are multiple, ranging from fatigue, weakness and headache, to cognitive, mood, and neurological disorders. The large number and systemic nature of symptoms has contributed to a major controversy surrounding Lyme disease - is it a purely acute infection easily treated with a short course of antibiotics or does it have a chronic form?

Now, a team of researchers from University of California Davis has uncovered a mechanism by which B. burgdoferi can cleverly avoid being eliminated by the host's immune system. Ironically it apparently does so by migrating to lymph nodes where there are high concentrations of immune cells which one would logically assume would take care of the invading pathogen in no time, but this does not appear to be the case.

In experiments on mice the researchers found that B. burgdoferi quickly accumulated in the lymph nodes where they triggered a rapid and strong immune response centred around the proliferation of B lymphocytes and their differentiation into plasma cells. Experimentation showed that these plasma cells produced antibodies (predominantly IgM) specific to B. burgdoferi and were therefore capable of recognising and targeting the pathogen. The key finding however, was that the antibodies produced were of poor quality and lacked the potency to be able to clear the B. burgdoferi spirochete infection from the lymph nodes.

If the identified mechanism of immune evasion by accumulation in the lymph nodes occurs in humans as it did in the mice in this study, it would suggest that B. burgdoferi can indeed cause chronic infection and chronic Lyme disease. A chronic activation of a B cell-mediated immune response could account for many of the symptoms that have been linked to chronic Lyme disease.

The bill's prime sponsor Gary Daniels, said the bill is an important step in helping both patients and doctors as it acknowledges chronic Lyme disease is a real ailment.

The bill states that: "No licensee may be subject to disciplinary action solely for prescribing, administering, or dispensing long-term antibiotic therapy for a patient clinically diagnosed with Lyme disease, if diagnosis and treatment has been documented and monitored in the physician's medical record for that patient."

Daniels said: "The problem we were encountering, and it seems to be a nationwide trend, is there are two standards for treatment and there seems to be favoritism over one standard that basically says there's no such thing as chronic Lyme disease."

He added that typically, if people have Lyme disease for longer than the four weeks traditionally thought to be the typical duration, they're instead treated for other diseases such as fibromyalgia or chronic fatigue syndrome.