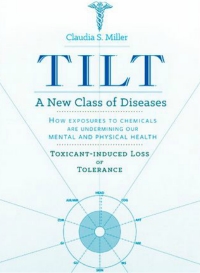 Originally described in 1996 by Dr. Claudia Miller, Toxicant Induced Loss of Tolerance, or TILT, is a theory of illness that has the symptom of chemical sensitivity, most commonly referred to as multiple chemical sensitivity (MCS), at its heart. Miller suggests that the theory not only explains the mechanisms behind multiple chemical sensitivity but can also be used to explain those behind other unexplained illnesses such as chronic fatigue syndrome (CFS) and Gulf War syndrome (GWS). Claudia Miller is Assistant Professor of Environmental and Occupational Medicine at the University of Texas Health Science Center, a leading MCS researcher, and co-author of the book Chemical Exposures: Low Levels and High Stakes.

Statistical data shows that chemical sensitivity is much more common in people suffering from chronic fatigue syndrome, Gulf War syndrome, and fibromyalgia, than in the population as a whole. A large proportion of these people do not report being sensitive to chemicals however, so many in the medical profession dismiss an important connection between these illnesses, chemical sensitivity, and chemicals as a causative factor. Miller explains that the TILT theory not only explains an underlying mechanism behind all of these unexplained illnesses, but also accounts for why people with CFS, GWS, and fibromyalgia, don't always report being chemically sensitive. Essentially, according to TILT, these people may very well be chemically sensitive but because they are routinely exposed to a bewildering array of chemicals every day and their symptoms are chronic, they don't associate exposure to specific chemicals with their symptoms. It's only when the person has been in a chemical free environment for an extended period and then is re-exposed to certain chemicals that the association with symptoms becomes apparent. More on this later.

In the simplest terms, the TILT theory is described accurately by its name, Toxicant Induced Loss of Tolerance. TILT explains multiple chemical sensitivity in terms of a condition caused by a loss of tolerance for chemicals that the person previously tolerated. This mechanism is likely to be neurological, perhaps limbic sensitization (kindling), but could also involve immunological mechanisms. The TILT theory does not require the exact biochemical mechanisms to be known however. Those who are skeptical that MCS even exists point to the fact that the majority of people tolerate chemicals just fine, so people claiming to be made ill by them most likely have a psychiatric condition. TILT explains why some people become ill while others do not.

The TILT theory makes a connection between drug addiction and chemical sensitivity, essentially saying they are two sides of the same coin, or different manifestations of the same underlying neurological dysfunction. In both cases the person affected tries to avoid withdrawal symptoms that are associated either with a lack OR presence of a substance. In drug addiction the person must get regular doses of the substance to which they are addicted to avoid unpleasant symptoms. In chemical sensitivity the person must avoid a substance (or substances) to avoid unpleasant symptoms. This avoidance is known as abdiction. The basic idea is that the normal response to a stimulant (eg. caffeine) involves stimulation followed by recovery. The loss of tolerance described by TILT leads to an increased response that leads to alternative strategies, either abdication (avoidance) in the case of MCS or addiction (persistent reinforcing doses) in the case of drug addiction.

Miller points out that people suffering from multiple chemical sensitivity are almost always sensitive not just to environmental chemicals in the form of volatile organic compounds (VOC's) in the air, but also to such things as caffeine, alcoholic beverages, various drugs, and foods. As such, TILT should not just been seen as an explanation for chemical sensitivity, but a theory describing a whole class of unexplained conditions (CFS, Gulf War syndrome etc) in which chemical sensitivity is often a defining feature.

Miller suggests that chemical sensitivity is a misnomer for the process under discussion and that the term toxicant-induced loss of tolerance (TILT) is a more useful one to both patients and doctors/researchers for the following reasons:

This brings us back to a questioned raised earlier. If TILT is behind conditions such as chronic fatigue syndrome and chemical sensitivity is a central feature, why don't all CFS patients complain of chemical sensitivities? Another important question is why challenge studies looking at people claiming to be chemically sensitive have failed to prove its existence. In these kinds of studies, chemically sensitive individuals have been alternately exposed to triggering chemicals and placebo substances in a controlled environment and have often failed to identify the chemical trigger by monitoring their symptoms. The TILT theory offers an explanation for all of this.

Central to this explanation is the phenomenon known as masking. Masking describes the situation in which patients suffering chronic symptoms don't realize that the symptoms are the result of repeated exposure to substances to which they have lost tolerance. When routinely exposed to triggering substances on a regular basis the symptoms these substances trigger appear to be constant, and therefore unrelated.

Miller notes that many chemically sensitive patients report that it was not until they accidentally or intentionally avoided a sufficient number of their problem substances that they noticed feeling better. The same goes for patients who go on a food elimination diet and then reintroduce foods one at a time. When they reencounter one of the offending substances, a distinct set of symptoms emerges. As patients repeat this investigative process of avoidance and reexposure, they notice that particular symptoms occur with particular exposures. Most indicate that had they not avoided many chemicals and foods simultaneously, or "unmasked themselves", they might not have determined what was making them sick.

To clarify further, when chemically sensitive individuals live in a relatively chemical-free home in a hilly/mountainous region, away from the pollution of urban and agricultural areas, and follow a diet free from their problem foods, they are said to be in an unmasked state. Whilst in this unmasked state, if they were to be exposed to a specific trigger such as diesel exhaust from a passing truck, or someone spraying insect repellent on themselves nearby, they would experience a distinct cluster of symptoms and be able to identify the triggering substance.

In the opposite circumstances, when patients travel to a large city like Los Angeles or London and engage with society as normal, staying in a hotel, and eating in restaurants, their symptoms become masked. In this situation the chemically sensitive person is exposed to many triggering substances simultaneously (vehicle exhaust, fragrances, volatiles offgassing from building interiors, various foods) and will usually complain of being chronically ill with symptoms akin to those of the flu such as weakness, muscle aches, headache, nausea etc. If the person were to be exposed to a specific known trigger such as the exhaust from a passing diesel truck under these conditions, most report they would not be able to attribute any particular symptoms to the exhaust because of background noise from overlapping symptoms occurring as a consequence of overlapping or successive exposures.

According to the TILT theory it is this background noise from concurrent exposures and resulting symptoms, masking, that accounts for people suffering from TILT related illnesses such as CFS who don't relate their symptoms to specific triggers. Masking also explains why researchers have such a hard time designing studies to adequately assess people claiming to be chemically sensitive and tie symptoms down to particular triggering chemicals. Miller explains that past research into chemical sensitivity utilizing challenge testing has failed because it hasn't taken into account the phenomenon of masking. Chemically sensitive subjects have been exposed to too many triggering substances in too short a period of time so that symptoms overlap and masking occurs, confusing their ability to correctly identify the trigger for their symptoms when challenged. Dr. Miller suggests that future research studies must be carefully designed, taking masking into account. This she says, must involve carefully designed 'Environmental Medical Units' (EMU's) which are essentially living quarters for chemically sensitive subjects which are entirely free from triggering substances. Materials that do not offgas must be used and other sources of triggers such as electronic devices like tv's must be considered. Only when investigators are certain that a subjects environment is totally free from triggers can accurate challenge testing be undertaken. Sufficient time between challenges with different substances must also be allowed for the patients symptoms to abate, once again avoiding symptom overlap.

Since Miller first introduced the TILT theory in 1996 it has attracted a lot of interest and many amongst those investigating chemical sensitivity and unexplained illness feel it is an accurate explanation for what is seen in these conditions. Rather than provide detailed biochemical explanations for the various tissues, cells or molecules, behind the symptoms experienced by the chemically sensitive, TILT provides an overarching theory for a new class of illnesses that involve environmental triggers and individual tolerance, or more importantly intolerance, for these triggers. Indeed TILT and the conditions it explains have brought comparisons with the early days of the germ theory of disease. Additionally the masking phenomenon that TILT introduces, from a chemically sensitive individual's point of view, accurately describes how exposures to triggering substances and resulting symptoms can overlap and appear continuous when exposures are concurrent. Finally, TILT provides vital information that can be used to radically improve the design of research studies into chemical sensitivity which will hopefully lead to recognition of the validity of the condition as a physical illness.