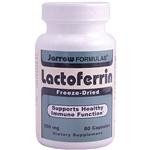 Lactoferrin is a glycoprotein and a component of colostrum and whey protein. One of the main jobs of lactoferrin is to bind to iron (which it does strongly) and carry it across the gut wall into the body.

As a nutritional supplement lactoferrin is predominantly used as an immune system booster and to improve gastrointestinal health.

Immune system - Digestion of lactoferrin liberates the immune supporting peptide lactoferricin B. This peptide stimulates the general humoral immune response, promotes the production and action of specific antibodies, and modulates the production of lymphokines. Studies in animals have also found that lactoferrin protected them from the lethal effects of bacterial lipopolysaccharide (LPS), a powerful endotoxin produced by gram-negative bacteria whose effects are even more severe when a leaky gut is present. Lactoferrin is also known to be a powerful antimicrobial in its own right. It effectively protects against a range of viruses and also has potent antimicrobual action against bacteria (including E.coli) and fungi/yeast such as Candida species.

Digestive Health - The gut is the entry point for a large number of potential pathogens into the body. Lactoferrin promotes the production of secretory IgA antibodies in the gut and also defends the body through its direct antimicrobial actions, preventing the overgrowth of Candida, bacteria and parasites. By binding iron it also prevents these potential pathogens utilising the mineral for their own growth. Lactoferrin also benefits digestive health by promoting the growth of lactobacilli and bifidobacteria, the friendly probiotic bacteria.