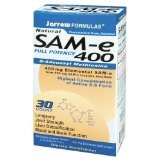 SAMe (S-Adenosyl Methionine) is derived from the amino acid methionine and is often referred to as 'activated methionine'. It is an extremely important chemical in a variety of processes within the body primarily because of its ability to donate 'methyl' groups.....an important action which is required for the formation of many other important chemicals in the body such as neurotransmitters in the brain. It also contains sulphur which is vital for detoxification and for joint health.

SAMe has been very well researched and studies have found it to be of benefit in conditions including:

Depression: Methylation by SAMe is required for the synthesis of the cathecholamines, a group of energizing neurotransmitters including dopamine, epinephrine/adrenaline and norepinephrine/noradrenaline. SAMe can be particular helpful therefore in the treatment of depression where lack of motivation and apathy are major symptoms.

Liver Health: SAMe is an important chemical in the production of glutathione (GSH) and dependent enzymes (glutathione peroxidase and glutathione-S-transferase), the body's master antioxidants. Studies have shown SAMe supplements effectively raise glutathione levels and are even helpful in the treatment of serious liver disorders such as hepatitis and cirrhosis.

Joint Health: SAMe supports joint health through its role in the production of healthy connective tissues. Through the process of transulphuration critical components of connective tissue, including glucosamine and chondroitin, are sulphated by chemicals derived from SAMe. Glucosamine sulphate and chondroitin sulphate have been shown to be important in the maintenance of healthy joints.