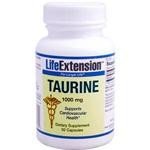 Taurine is usually referred to as a sulfur-containing amino acid but is technically a sulphonic acid derived from cysteine - a true sulfur-containing amino acid. Taurine is abundant in the body but requirements may increase in times of stress - whether that be intense exercise, toxic exposure, or chronic illness. It has many functions in the body with some of the most important in terms of environmental illnesses being:


Detoxification
Taurine is involved in detoxification in a number of ways. It is used by Phase 2 detoxification pathways in the liver (and some other tissues e.g. small intestinal mucosa). It serves as a source of sulfur for the important sulfation pathway which detoxifies many environmental toxins including petrochemicals from industrial and vehicle-derived pollution as well as cleaning and personal care products, while also neutralizing toxins produced by dysbiotic bacteria in the gut. Taurine also acts directly, conjugating (sticking to) toxins so they can be excreted safely from the body.

Taurine is also a component of bile which is important in many ways. It is vital for the digestion and absorption of fats and is also important for detoxification with chemicals detoxified by the liver being secreted into the bile for removal from the body in bowel movements. Through its role in bile production and fat metabolism taurine helps to prevent fatty build up in the liver which can lead to fatty liver disease - thus maintaining the health and function of the liver as a whole. Increased taurine levels therefore aid detoxification through increasing bile production.

Taurine plays a major role in the brain as an "inhibitory" neurotransmitter. Taurine is similar in structure and function to gamma-aminobutyric acid (GABA) (which you have no doubt come across) and has similar effects - acting to reduce activity of stress centers in the brain, therefore having calming and stabilizing effects. Taurine also inhibits the release of adrenaline/epinephrine - the stress hormone released during the fight-or-flight response that gets our heart pounding and racing (along with our mind!).

Other positive effects of taurine supplementation include improving blood sugar control and hence insulin resistance and diabetes type II and reducing blood pressure in those with hypertension.

(from iherb.com - save $5 on your first order using promotional code: MAT856)
Tweet