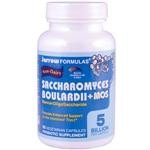 Saccharomyces Boulardii is a non-colonizing yeast species closely related to Brewer's yeast which is classed as a probiotic organism due to its health benefits. It is not related to the yeast group to which Candida belongs and indeed is recommended by nutritionists for the treatment of intestinal Candida overgrowth.

Saccharomyces boulardii taken orally in nutritional supplements produces lactic acid and some B vitamins as it becomes established in the intestine in much the same way as more well known probiotic bacteria such as Lactobacillus acidophilus.

It is thought that supplementation with Saccharomyces Boulardii enhances the ability of other friendly probiotic bacteria such as lactobacilli and bifidobacteria to colonize the gastrointestinal tract. It is therefore often used incombination with other probiotic products and many combination probiotic products now include this uniquely beneficial yeast species.

Research has proven the benefits of Saccharomyces Boulardii in the trestment of a range of GI conditions including acute diarrhoea, Clostidium difficile infection, and Helicobacter pylori infection. It has also been shown to improve immune function, particularly by increasing levels of the antibody secretory IgA within the GI tract.

This probiotic yeast is used to aid in restoring balance in any situation where the normal flora of the GI tract has been disiturbed (dysbiosis).