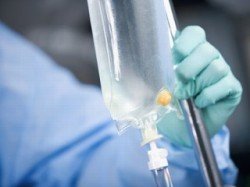 Chelation therapy is used in the treatment of heavy metal toxicity. Chelation (pronounced "key-lay-shun") is the chemical process by which a chelating agent binds to ions of heavy metals such as mercury, lead, and arsenic to form substances which can be easily excreted by the body through the kidneys and liver.

Chelation therapy can be administered either intravenously or orally depending on factors such as the severity of exposure and symptoms as well as the chelating agent to be used. Chelation therapy is used in both conventional and alternative medical practice but often for different reasons and using different methods and chelating agents. Conventional medicine is primarily concerned with using chelating agents for acute heavy metal poisoning, while alternative medicine is primarily concerned with treating the effects of chronic toxic metal exposure.

Intravenous (IV) chelation therapy is carried out in a hospital or doctor's office and involves the slow infusion of a chelating agent into the blood stream via an IV line. The process typically takes 23 hours and as many as 20-30 treatments are often required.

Common IV chelating agents include EDTA (ethylenediaminetetraacetic acid), DMPS (2,3-dimercaptopropanesulfonic acid), and TTFD (thiamine tetrahydrofurfuryl disulfide). EDTA is the oldest synthetic chelating agent used intravenously and has largely been replaced by oral DMSA (2,3-dimercaptosuccinic acid) in conventional medicine in the US and other countries, as DMSA is effective and has a better safety profile. DMPS was developed in russia and also appears to be safe and effective when used appropriately. It has been used in Europe for many years under the name Dimaval but is currently considered an investigational drug in the US.

Oral chelation therapy is obviously a much simpler procedure than IV therapy for the patient, although the two may sometimes be used in combination. The principal is the same but oral therapy uses drugs and nutritional supplements which can be absorbed from the digestive tract as chelating agents.

Oral chelating agents used in conventional medicine include the drug DMSA and the nutritional supplement alpha lipoic acid (ALA). ALA is converted into a sulphur-containing substance similar to DMSA and DMPS in the body and is a particularly potent chelator of mercury and arsenic. DMSA is reported to be highly effective at penetrating brain cells to bind toxic metals deposited there.

Along with DMSA and ALA, alternative medical practitioners may usenatural chelating agents such as the algae chlorella and the herb cilantro (coriander). Algae such as chlorella possess the ability to absorb large amounts of heavy metals from their environment (they are actually used in industry to remove heavy metals from effluent). Chlorella is said to be particularly useful for removing mercury from non-neurological tissues and aiding its removal in the stool. Cilantro is used to pull toxic metals including mercury, lead, and aluminium out of the brain and from within cells. These metals may then be excreted through urine and/or stool or may be deposited in peripheral tissues. Other chealting agents may then be used to remove them from the body.


Safety and Other Issues

The use of chelation therapy is often controversial, no more so when used in autistic children, some estimates suggesting up to 8% of children with autism have gone through the therapy in the US. When used inappropriately there is the potential for chelation therapy to simply move toxic metals around the body, perhaps from soft tissues to the brain, where they can actually cause more damage and disease. Chelating agents also bind to important nutrient minerals such as zinc and copper and can cause deficiencies; careful monitoring and nutrient supplementation is therefore vital. For these reasons it is important that anyone considering chelation therapy should do thorough research of their own and work only with recognised medical professionals.